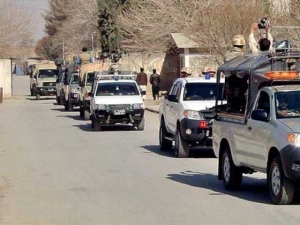 Occupied Balochistan: Pakistani security forces have attacked the house of Mohammad Bux aka jaggoo Baloch in Nasirabad area of Turbat. People have strongly reacted and observed a shutter down protest in Thump, Mand and Nasirabad regions.

According to details four vehicles Pakistani forces surrounded the houses of a Mohammad Bux Baloch in the early hours of Sunday Morning. Mohammad Baloch aka Jaggoo was not at home at the time of raid but the security forces arrested his two brothers and a nephew. The arrested men have been named as Ghulam Qadir, Khalid, a tailor by profession and their nephew Mazar Baloch.

Local sources say that Pakistani security forces have in past also raided the house of Mohammad Bux Baloch but he was not at home and survived arrest.

Meanwhile a shutter down protest have been observed in Mand, Thump, Nasirabad and several other surrounding areas against the raid on Mr Baloch’s house and abduction of his two brothers and a nephew.