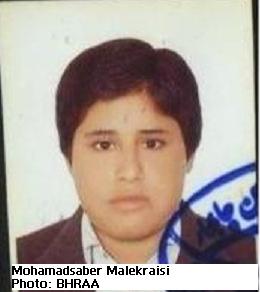 Occupied Balochistan,ZAHEDAN: Mohammad Saber Malek Raisi, a Baluch teenager who was kidnapped by the Iranian Intelligence Agency 20 months ago, still remains locked up in solitary confinement.

According to a report by Human Rights Activists News Agency (HRANA), this Baluch teenager was arrested in late 2009 in Chahbahar County because his brother refused to cooperate with the Ministry of Intelligence and National Security of the Islamic Republic of Iran. Mohammad Saber Malek Raisi has been locked up since then in solitary confinement in a detention center in the city of Zahedan, [Sistan and Baluchistan Province]

In the last twenty months, Mohammad Saber Malek Raisi has been denied access to phone or visits with his family. During this time, he has also been unable to attend school and has fallen behind his education.

Since Zahedan Intelligence Agency has neither offered any explanation regarding this teenager’s continued detention nor Mohammad Saber Malek Raisi has been tried for any crimes, it is safe to conclude that the arrest has been done illegally.

In an earlier interview with HRANA, Mohammad’s brother expressed his concern and said that he was worried about his brother’s continued detention since the Intelligence Agency could be holding Mohammad hostage until he would be at a legal age to be executed.

Despite the fact that one year ago the news of this arrest was published, and Mohammad Saber Malek Raisi was introduced to the world as Iran’s youngest political prisoner, human rights organizations inside or outside Iran have made no effort to look into this prisoner’s condition.

In short, Mohammad Saber Malek Raisi has been denied the right to attend school or pursuit a normal life for twenty months, and his family has not been allowed to see their child for the same period of time.

Courtesy:HRANA News Agency
Posted by Mohim Baloch at Saturday, May 28, 2011