Mutilated bodies speaks for themselves, Pakistani forces have unleashed the hell 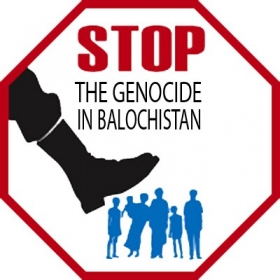 Occupied Balochistan: Pakistani security forces have attacked the house of Mohammad Bux aka Jaggoo Baloch in Nasirabad area of Turbat. People have strongly reacted and observed a shutter down protest in Tump, Mand and Nasirabad regions.

According to details four vehicles of Pakistani Forces surrounded the house of Mohammad Bux Baloch in the early hours of Sunday Morning. Mohammad Baloch aka Jaggoo was not at home at the time of raid but the security forces arrested his two brothers and a nephew. The arrested men have been named as Ghulam Qadir, Khalid a tailor by profession and their nephew Mazar Baloch.


Local sources say that Pakistani security forces have in past also raided the house of Mohammad Bux Baloch but he was not at home and survived arrest.

Meanwhile a shutter down protest have been observed in Mand, Tump, Nasirabad and several other surrounding areas against the raid on Mr Baloch’s house and abduction of his two brothers and a nephew.

The detailed report of the above news which was recorded in the early Sunday afternoon summarized the illegal arrest of Khalid Baloch who is recently found in the ruins of Pedark, Murgaap of the district Turbat. The 24 hour killing of Khalid Baloch have shunned those voices who claimed a foreign hand in the mutilated bodies while Khalid Baloch was illegally arrested by the Pakistani Forces and in just other day his body was found with brutal torture markings over all his face and body parts and a bullet hole in the back of his head, proofing them all wrong that the abductor and the killer is one and they are none other than the Pakistani forces.

The grieving picture of mutilated bodies as crossed the humanitarian line, more than 170 mutilated bodies of the Baloch missing persons were recovered from barren regions of Balochistan, Khalid Baloch found inches away by another martyred missing named Ahmed Baloch a local of Mand are the new and fresh bodies received news heard in Balochistan. Thousand others have languished inside the torture cells of Pakistani security forces and the family members are unaware of their fates and those who are being recovered are handed over with bullet holes pierced in their heads or torso.

The mass murderer have shown their true faces in the 70s and they are doing that again in this century but the international powers and the Human rights organizations have turned the picture upside down without looking into the cases, they have dismissed the unheard who wants to speak the truth.