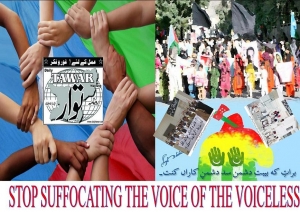 A press release issued by President of BHRC (Canada) Dr Zaffar Baloch expressed serious concerns over the violent act of vandalism against the Balochistan-based Daily Tawar and termed it a violation of freedom of speech. While condemning the burning of the copies of Daily Tawar and vandalizing the newspaper’s offices, BHRC stated that such deplorable acts not only violate the sanctity of rights and freedoms but also unwittingly endorse the state policy of silencing Baloch journalists.

The statement of Baloch Human Rights Council further emphasized that Baloch people have limited access to media and destroying local resources will only enable the state in effectively repressing the Baloch voice of dissent. BHRC stated that the Pakistani establishment is already targeting Baloch journalists and we have lost the lives of Lala Hameed Hayatan, Ilyas Nazar, and Mohammad Khan Sasoli to the extra-judicial killings by the security forces. Furthermore, any attack on a Balochistan-based newspaper will endanger the lives of Baloch journalists in future.

BHRC (Canada) appealed to the sensibility of the Baloch leadership to help protect freedom of press and resolve differences peacefully among the youth so that it does not escalate into a full-blown culture of violent means to settle disputes. The human rights group also expressed solidarity with the publishers and journalists of Daily Tawar for their unwavering courage in working under dangerous circumstances to promote the voice of Baloch rights and freedoms including the freedom of speech.

Meanwhile Aziz Baloch the co-ordinator of International Voice for Baloch Missing Persons (IVBMP) (Canada) has also strongly condemn the attack on Daily Tawar saying that at a time when the state is abducting and killing Baloch activists indiscriminately from Kohlu to Makuran. “Army operation is ongoing in Makuran region and other parts of Balochistan where the state is committing mass murder of Balochs and the Pakistani media has opted to remain completely silent on the heinous crimes of the Pakistani security forces in Balochistan – the world is almost unaware of state terrorism in Balochistan”. Aziz Baloch amidst of all bloodshed and silence Daily Tawar has been the only ray of hope for the Baloch people on National and International level. He said several International and Baloch websites have translated and published News Items and article carried by Daily Tawar. Under such circumstances it very unfortunate that some people are trying to suffocate the truth and the only Voice of the oppressed Baloch Nation.

Dr Mustafa Baloch the co-ordinator of International Voice for Baloch Missing Persons (London) has also strongly condemned the attack on Daily Tawar. “I am sure these attackers have sold their loyalties to Pakistani establishment and they are committing a National crime” said Dr Mustafa. He went on to say that Daily Tawar has been the only true sources of information for us, the Diaspora Baloch. At a time when over 8000 Baloch are illegally detained by Pakistan, when Pakistan and Iran are carrying out joint operations against Baloch people and when the most talented sons of Balochistan are carefully being selected and killed by the state; the Baloch political parties, students Organisations and political leaders must spend their time and energy only to make sure the safety of Baloch youth. At this critical juncture of Baloch history if anyone tried to suffocate the Baloch Voice by attacking the only volunteer Newspaper that has risked everything to exposed the state’s atrocities against Baloch people then such Organisations, parties and individuals are surely working for Pakistan Intelligence agencies.

In a separate statement, the DC-based pro-independence American Friends of Balochistan also appealed to the Baloch leadership that the attack on Daily Tawar must be construed as an attack not only on the freedom of the Press but also the David-and-Goliath independence movement of Balochistan, led by the young heroes and heroines in the Baloch National Front and allied resistance organizations.

"The attackers who belong to the Baloch Students Organization (Mengal) must publicly apologize for their uncalled for actions. Our heads are bowed in shame over these cowardly attacks by our very own blood-and-bone on the sacrosanct principle of the freedom of the Press."

The A.F.B. observed that it was a great tragedy that there are many Punjabi and mohajir-owned newspapers who are the mouthpiece of the Pakistani defense and civil establishment and they are doing business as usual iin cahoots with the corrupt bureaucracy in Quetta, but the lone voice for the Balochistan freedom movement is being targetted by misguided Baloch youngsters.
"Daily Tawar, by its bold and courageous reporting, has earned its place in the future annals of the Balochistan war of liberation. Images of burning copies of Daily Tawar and their ransacked office have left us bereft and must be condemned by all Baloch writers, intellectuals, poets, political activists, political leaders regardless of their political persuasion and party affiliation."

The A.F.B. said it is a strange coincidence that the burning of Daily Tawar in the month of May coincides with the May 1933 barbarism in the German cities of Berlin and Leipzig when the Nazis tossed thousands of books into the flames of already ignited bonfires.

The A.F.B. said Helen Keller, a blind, deaf and mute American writer had said about the Nazi book-burning then, "History has taught you nothing if you think you can kill ideas... I deplore the injustice and unwisdom of passing on to unborn generations the stigma of your deeds."

Baloch Community Dubai has also expressed grave anger against attacks on Daily Tawar. Baloch activist and Diaspora residing in Dubia has said that burning the copied of Daily Tawar and attacking its offices in different areas of Balochistan was in-effect an attack on press freedom. They said Tawar has played in important role in creating political awareness among Baloch youth; hence, attack on Daily Tawar is a huge conspiracy against Baloch Liberation Movement. The leaders of Baloch Community Dubai said that Baloch people residing in Gul Counties and elsewhere will stand by their only true Voice at the difficult time. They urged BSO (M) and its leadership to immediately stop their unprovoked attacks against the Daily Tawar.

In this backdrop when Baloch lives were being decimated and the honor of their women were at stake, Mehran Baluch said no words would be enough to condemn the cowardice being shown by so-called nationalist organizations, in particular the Baloch Students Organization (Mohyuddin Group).

“Daily Tawar was already facing state terror of Pakistan and now the so called Mohyuddin Group is trying to facilitate the job of the state security services,” he said.

Mehran Baluch said the fledgling Baloch media was already facing Islamabad's censorship but a handful of Baloch journalists and newspapers had boldly picked up the gauntlet and were busy doing their work of propagating the truth about the national liberation movement with a missionary zeal. “By harming the Daily Tawar, the Mohyuddin Group has become a collaborator of the enemy,” Mehran Baluch said.

He said Daily Tawar has published expose of the enforced disappearances and extra judicial killings of Baloch patriots and dumping of their bodies; aired interviews of the leaders working for Balochistan's independence, while Pakistan always tried to muzzle the voice of freedom in Balochistan.

“Does Mohyuddin like his masters want to cover up Pakistan's state terrorism, genocide and gross violations of human rights in Balochistan?” Mehran Baluch asked. “If this is indeed the case, the Baloch are justified in saying that that these people are fully involved in Pakistan's grand scheme of Baloch genocide. Sooner or later, they will have to face the wrath of the Baloch masses.”

He said it is an article of his faith that independence is the destiny of Balochistan. “These people should not live in a fool's paradise that even after Balochistan's independence their Punjabi masters, who have a vested interest in the national slavery of Baloch people, would provide them safety and security.”