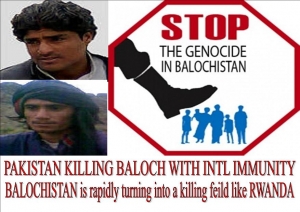 Occupied Balochistan: Four more bullet riddle bodies, including a government teacher, were found from Murgaap area on Monday and Tuesday mornings respectively, some 15 kilometres away from Turbat City.

Balochistan Levies force recovered the bodies in Murgaap area of Kech District, some passerby spotted the bodies and informed the levies force, a levy official Qadir Ahmed said. The bodies were shifted to the Civil Hospital Turbat where they have been identified as Khalid Hanif s/o Doshambeh a government school teacher and a resident of Nasirabad and Jameel Ahmed s/o Ali Bux a flock owner, a resident in Mand. A note found in Khalid Hanif’s pocket read that “his brother Mohammad Bux aka Jaggoo is fighting against Pakistani forces in the mountains of Balochistan; unless he comes down and surrenders, security forces will continue to kill his close relatives and members of family”.

Both the victims received bullet in their head which is cause of their death, doctors told media persons. “Khalid Hanif was picked up along with his younger brother Ghulam Qadir (a tailor) and nephew Mazar Baloch (a Student) by the Frontier Corps personnel from the house in Nasirabad on Sunday morning,” a relative said.

The younger brother and nephew are still missing and their cases are registered. Jameel Ahmed s/o Ali Bux was picked up from his house in Gowargo area of Mand on Saturday, sources said and adding that his family members also believe that security Pakistani forces of killed him during his illegal detention. The funeral prayers of Khalid Hanif and Jameel Ahmed were offered in their native towns on Monday evening.

Baloch Nation has not yet finished paying their last respects to the Martyrs of Monday morning when two more bullet-riddled mutilated dead bodies of Baloch enforced disappeared persons were found from Murgaap area of Turbat town of occupied Balochistan on Tuesday morning (Today). They have been identified as Abid Saleem Baloch and Mehrab Umer Baloch, who were abducted by Pakistani secret agencies on January 24, 2011 along with Shaheed Abid Rasool Bakhsh and Nasir Dagarzahi from panjgur Balochistan. The abductions took place at the residence of Naser Dagarzai Baloch, where Pakistan army broke into the house, harassing and beating the women and children at the house.

It is pertinent to mention that Abid Rasool Bux Baloch, a 17 year old Baloch student, and Naser Baloch were shot and dumped in Gwargo area of Panjgour on 27 January 2011. Abid Rasool had died instantly but Nasir Dagarzahi survived miraculously despite being shot in his neck and legs.

Families of Mehrab Umer and Abid Saleem Baloch had recently held a press conference at Quetta Press Club where they expressed grave concerned about the safety of their loved ones. They feared that their loved ones would killed in the same manner as thousands of other Baloch by Pakistan's Intelligence agencies - today's recovery of the bodies of the two youth confirmed the fear and anguish of Baloch families.

According Radio Gwank reporter from Balochistan people are both shocked and angry and shutter down protests have become routine of the day in entire coastal belt of Balochistan. He further said that people are extremely angry at the criminal silence of International Human Rights Organisation, the UN, EU and other big democracies who make tall claims of preserving Human Rights, peace and equality around the world but they are turning a blind on the ongoing genocide of Baloch Nations by Pakistan.