Posted by Mohim Baloch at Wednesday, March 30, 2011 No comments:

Email ThisBlogThis!Share to TwitterShare to FacebookShare to Pinterest
Baluchistani Political and other organisations held a demonstration in London
outside the US Embassy on the occasion of 63rd occupation anniversary of
Baluchistan. 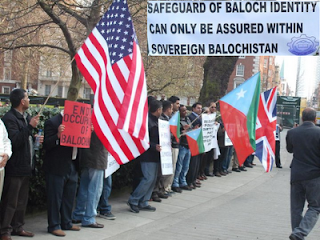 Posted by Mohim Baloch at Wednesday, March 30, 2011 No comments:

The Pakistani province of Balochistan, tight up against the Taliban stronghold of Helmand and sitting on untold mineral wealth, is riven by violent revolt. 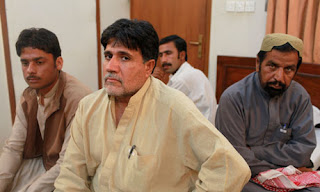 Relatives of men who have been abducted in Balochistan by, they claim, the government's Frontier Corps. Photograph: Declan Walsh for the Guardian
Afghanistan, the centre of the Taliban insurgency and the world's single largest source of heroin. Baram Cha, a small town tucked into the Chagai Hills just inside the Afghan border, is a notorious hub of heroin processing labs, and has been raided by helicopter-borne teams of British special forces and Afghan counter-narcotics soldiers. From Helmand, the drugs cross Balochistan via two routes – west to Iran and south to the Makran coast on the Arabian Sea.


Gwadar port Completed in 2008, this Chinese-built project transformed a sleepy Baloch fishing village into a major deep-water port. It's strategically located near the Straits of Hormuz – a major oil shipping lane – and China wants access to the sea for its land-locked western provinces. But the US sees it as a potential military base, and the UAE considers it unwelcome competition. Baloch nationalists view Gwadar as an imposition by the central government whose benefits will bypass the province. It has become a hub of violent upheaval in the past two years, with shootings and bombings by nationalists, and reprisal abductions and killings by the security forces. Gwadar was not traditionally under the sway of tribal leaders, suggesting that Balochistan's fifth insurgency has a broader reach than previous ones.


Nato supply lines After the Khyber Pass, Balochistan is Nato's second largest Pakistani supply route to troops in Afghanistan. More than 3,000 trucks pass through Balochistan every month. Between nine and 12 of them are attacked and burned every month, according to army figures. It is not clear whether the attacks are by Baloch militants or pro-Taliban Islamists.


Taliban bases Taliban fighters rest and recuperate in madrasas and mosques dotted along the ethnic Pashtun belt of Balochistan, between Quetta and the border, where at least 30% of the population lives.


Nationalist insurgency One of the world largest natural gas fields is located at Sui, which provides approximately 30% of Pakistan's gas needs. The insurgency started in earnest from this region from 2005, when Bugti tribesmen attacked Pakistani security forces guarding the gas field. In 2006, the army killed the Bugti leader, Nawab Akbar Khan Bugti, at a cave in the mountains near Kohlu, dramatically fuelling the insurgency. Quetta, the provincial capital, has seen many "disappearances" of Baloch nationalists in recent years. Since July it has also seen a steady stream of bodies dropped on the edge of the city. Electricity, gas supplies and train services to the city are frequently attacked by Baloch rebels. The small town of Khuzdar is home to the Mengal tribe, which has been involved in several of Balochistan's insurgencies over the past six decades. It has seen a string of violent acts in the past year – shootings of journalists, abduction of Baloch activists by security forces, dumping of bodies bearing torture marks. Nationalist rebels, in turn, have lobbed rockets into the local Frontier Corps base and ambushed military convoys.

http://www.guardian.co.uk/world/2011/mar/29/inside-balochistan-province-pakistan
Posted by Mohim Baloch at Wednesday, March 30, 2011 No comments: 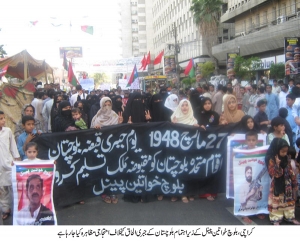 Karachi: A massive protest demonstration was held in front of Karachi press club on the call of Baloch Women Panel to protest the illegal and forceful annexation of Balochistan to Pakistan on 27/03/1948. People from all walks of life including large numbers of women and children took part in the protest to express their hatred toward Pakistan for illegally occupying Balochistan and the ongoing atrocities being committed against Baloch people across Balochistan and Karachi.


Addressing the crowd of people the leaders of Baloch Women Panel said that Baloch Nation have never accepted the illegal annexation of their sovereign state to Pakistan and have been resisting against occupying forces since the day of occupation. The struggle to regain Independence is still ongoing and will continue until the occupying forces withdraw from the Baloch land. Pakistan has resorted to barbaric and inhuman tactic to quell or even eliminate the struggle for liberation but it failed as Baloch Freedom Movement instead of becoming weaker is gaining momentum. The Baloch resolve and aspiration for National Liberation are growing day by day. “We are confident and hopeful that blood of Baloch martyrs will bear fruit and Balochistan will soon become an Independent state once again”, said the BWP leaders.


Pakistan’s coward army instead of fighting the Baloch Sarmachaars is taking out their anger and frustration on innocent Baloch civilians. They have abducted and killed thousands of innocent Baloch who belong to all walks of life – after brutal torture they shot our youth in their heads and hearts and throw their bodies in deserted places. If the state [Pakistan] thinks by such inhuman acts it will stop the liberation movement then it (the state) is gravely mistaken. Baloch will continue to love their motherland Balochistan and will strive for its freedom till their last breath and last drop of blood, vowed the Baloch women leaders.


They have appeal the UN and EU to recognise Balochistan as an occupied territory and declare Baloch prisoners in Pakistani Jails as “Prisoner of war and prisoners of conscience”. They demanded that Pakistani leaders, heads of military and Intelligence agencies should be indicted of International war crimes and trailed at International criminal court. The UN and the International Community must play their due role for the release and protection of Baloch enforced disappeared persons who are illegally detained in secret torture cells of Pakistan.

http://www.balochwarna.com/modules/news/article.php?storyid=3156
Posted by Mohim Baloch at Tuesday, March 29, 2011 No comments:

Pakistani media does not report on the brutal realities of Balochistan

by
Ali Dayan Hasan
Published in:
The News on Sunday

Ali Dayan Hasan
MORE COVERAGE:
"Their Future is at Stake"

The News on Sunday (TNS): How does HRW view the current state of human rights in Balochistan?
Ali Dayan Hasan (ADH): The toxic mix of armed nationalist, sectarian and Taliban actors on the one hand and the trigger-happy military authorities on the other, makes Balochistan one of the most dangerous places in the world today. Illegal detention, torture, disappearances and targeted killings by the military are commonplace. Abuses by nationalist militants are also on the rise. It is an appalling situation and the great losers in this are the long-suffering people of the province.
TNS: Your report on attacks on education in Balochistan was criticised by the nationalists as focusing too much on the issues of settlers. What was the reason for highlighting that?
ADH: Human rights protections should be enjoyed by all. Abuses by the state do not allow others license to abuse in turn. It is our view that Baloch nationalists, sectarian militants and Taliban groups have all been involved in attacks on education sector personnel. Whoever targets civilians on the basis of ethnicity is in effect engaging in a policy of ethnic cleansing and this is unacceptable and criminal. Period. The notion that you can legitimately engage in such acts as "retaliation" is nonsense. Even if Baloch nationalists do not recognise the sovereignty of Pakistani state, they are still committing war crimes by attacking non-combatants and they should fully expect and receive censure and condemnation. And by perpetrating such atrocities, Baloch nationalists are harming Balochistan's development instead of advancing it and destroying the future of their land and its people.
TNS: During insurgencies, human rights are at risk. Do you think that Pakistan government can carry out its anti-insurgency operations without use of force?
ADH: No one is suggesting that the writ of the state should be compromised. Rather, it should be enforced in a rights-respecting manner in accordance with laws and bearing in mind the constitutional protections that must extend to every Pakistani citizen regardless of political affiliation or ethnicity.
TNS: What is HRW's assessment of external involvement, especially in terms of providing arms/financing to separatist groups who target civilians?
ADH: We understand that the government of Pakistan argues that external actors, especially India and Afghanistan, are involved in fomenting unrest and abuse in Balochistan. Even if that is the case, it does not mean that the Pakistani state can abuse the Baloch or violate their rights by way of retaliation. Besides, HRW and others have repeatedly asked the government to bring any evidence to back up these claims into the public domain. So far, nothing meaningful has been offered.
TNS: What is the HRW's stance on missing persons in Pakistan, especially Balochistan?
ADH: Enforced disappearances remain a serious, widespread, and ongoing problem in Balochistan and HRW has documented such abuses by the intelligence agencies and the FC in the province. Those we interviewed for a forthcoming report on disappearances perpetrated by military authorities in the province live in extreme fear of the military. The interviews had to be conducted in secret locations outside the province. We will be releasing a detailed reported in the coming weeks on these disappearances and we expect answers from the government and a serious attempt to hold those guilty of these abuses accountable.
TNS: Is there sufficient international and domestic focus on human rights situation in Balochistan?
ADH: Unfortunately there is not. The Pakistani media does not report on the brutal realities of Balochistan in any meaningful manner. Despite the fact that the province is of great strategic interest to the world, its people suffer from persistent, systemic and widespread human rights abuse both by state authorities and at the hands of non-state actors. It is time Pakistanis and the world paid attention.
Ali Dayan Hasan is a senior researcher in the Asia Division of Human Rights Watch
http://www.hrw.org/en/news/2011/03/29/pakistani-media-does-not-report-brutal-realities-balochistan
Posted by Mohim Baloch at Tuesday, March 29, 2011 No comments: