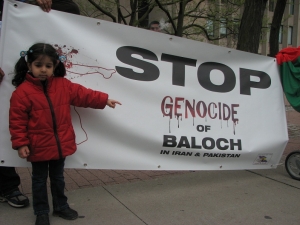 Toronto, May 27, 2011 – Toronto and Vancouver chapters of Baloch Human Rights Council (Canada) staged demonstrations in front of the U.S. Consulates today to protest the 13th anniversary of Pakistan’s nuclear tests in Balochistan back in 1998. In a press statement released from the BHRC’s central office in Toronto, the organization’s leaders declared the N-tests a black day in the history of Baloch nation and a threat to world peace.

The demonstrations held in Toronto and Vancouver, the two major cities of Canada, were jointly organized by Baloch Human Rights Council (Canada), International Voice for Baloch Missing Persons (IVBMP), and the International Centre for Peace and Democracy (ICFPD). The participants in the demonstration came from all walks of life, particular the Baloch Diaspora, Kashmiris, Sindhis, and the progressive and secular elements in society.

It should be noted that Pakistan conducted a series of nuclear tests on May 28 and May 30, 1998 in the Chaghai hills of Balochistan.

The statement elaborated that the human rights situation in the Iranian and Pakistani occupied Balochistan is appalling with day-to-day occurrences of enforced disappearances of civilian populace that have now surpassed 13,000 souls. In addition, torture; extra-judicial killings; summary executions; public hanging; targeted killings of political leaders; and in-custody deaths at the hands of state security forces have become rampant. The ongoing military operation across Balochistan and the adopted ‘Kill and Dump’ policy of the Pakistani military death squads have resulted in the deaths of hundreds of disappeared Baloch activists, students, journalists, doctors, teachers, and lawyers.

The leaders said that the sovereign nation of Balochistan was occupied by Iran and Pakistan in 1928 and 1948 respectively. Pakistan’s army illegally occupied the independent nation and forcibly annexed it into their state boundaries. Since its occupation, Balochistan has been struggling for independence from the yolk of colonial control and exploitation of Islamabad and Tehran.

Participants in the demonstration demanded:

• Stop U.S military aid to Pakistan
• Ban the nuclear weapons program of Pakistan
• Assert diplomatic means to end the gross human rights violations against the Baloch civilians in Iran and Pakistan.
• Review US-Pakistan relationship and actively engage in building bridges with the Baloch nation.
• Support the rights and freedoms of Baloch nation and actively pursue the cases of enforced disappearances, torture, and extrajudicial killing of civilians in Balochistan
• Support human rights in the Iranian occupied Balochistan.
• Accelerate the process of stopping Iran becoming a nuclear weapon state.