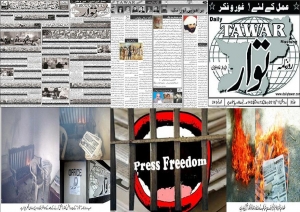 Occupied Balochistan: The unprovoked attacks on the offices and burning of the copies of Daily Tawar, a Balochistan based Urdu language daily, have been strongly condemned by people from all walks of life in Balochistan.

It is worth recalling that a tiny student group (BSO-Mohiuddin) which is considered to be the student wing of Balochistan National Party (Mengal) or BNP (M) have launched an offensive campaign against Daily Tawar alleging that the Newspaper is not giving them proper coverage. This group also alleges that the Newspaper is allowing people to write, what they call abusive articles against their leadership, with pseudo names. The Daily Tawar, however, categorically rejected such allegations and clarified that it has been publishing the statements of both BNP (Mengal) and BSO (Mohiuddin). The Newspaper considers such attacks a systematic offensive campaign of anti Baloch elements who do not want the Newspaper to expose state atrocities against people of Balochistan.

Baloch people from all walks of life have strongly condemn the attack on the Newspapers and termed the activities of this student group as anti Baloch and a planned attack to suffocate the truth. The parties that condemn the attack on Daily Tawar Include, Pishkan Adabi Cultur (PKASO), Gwadar Education Welfare, BNF (Unity pro-freedom political parties), Unity of Press Clubs in Balochistan, BSO-Azad, Maed National Unity, Lucky Inaami Sakeem, Anjuman-e-Itehad-e-Ghariban, local notable of Jewani and Sarbandar regions of Balochistan have also strongly condemned that attack on Balochistan most popular Newspaper. The above mentioned parties and socials group have termed the attack as an attack on freedom of press in Balochistan and a childish act by the particular student group. They called upon the leaders and supporters of BSO (M) to immediately stop their attack against Daily Tawar. Different press clubs of Balochistan called emergency meeting to discuss their future course of action against such attacks.

Meanwhile in a joint statement the Pasni Press Club, BSO-Azad, BRP and BNM have praised the Newspaper for its bold stand on Balochistan issue and strongly condmned the BSO (M) for burning the copied of Daily Tawar. They said that this student group’s (BSO-M) such actions illustrate today they are burning Daily Tawar’s copies in a bid to silence the Newspaper from writing the truth and tomorrow they will repeat the same with other Newspapers in Balochistan.

Baloch youth on social networking site such as Facebook, Twitter and others have also strongly condemn the attack on Daily Tawar by calling it a childish act of some cheap people. One Baloch facebook user Adeenag Baloch wrote “Counter-insurgency thugs determined to shut Daily Tawar. BSO (M) notorious act is the first step, more from other yet to come. We will see crackdown on other sites and journalists”.