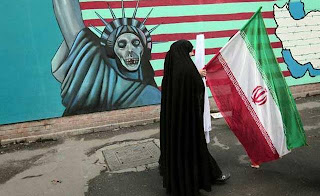 According to Iran’s semi-official Fars news agency, the suspects had passed information to US officials at embassies and consulates in third countries. (File photo)
Iran has arrested 30 people it said were spying for the United States.


According to Iran’s semi-official Fars news agency, the suspects had passed information to US officials at embassies and consulates in third countries, including Malaysia, Turkey and the United Arab Emirates.


It said Iran had identified 42 US intelligence officers in such countries, saying: “They engage in collection of information regarding Iran’s nuclear, aerospace defense and bio-technology fields,” among other areas.


Washington has had no diplomatic presence in Iran since the 1979 theocratic revolution that deposed the US-backed Shah Mohammed Reza Pahlavi, and was followed by the occupation of the US embassy for 444 days.


Diplomatic cables published by the WikiLeaks Website showed the United States operated information-gathering desks on Iran in neighboring countries where diplomats would seek to glean intelligence from travelling Iranians.


The announcement of the arrests comes two days after US President Barack Obama made a speech on the Middle East, reiterating Washington’s view that Tehran sponsors terrorism and is developing nuclear weapons, charges that Iran vehemently denies.


(Sara Ghasemilee, an editor at Al Arabiya English, can be reached at: sara.ghasemilee@mbc.net)
Posted by Mohim Baloch at Sunday, May 22, 2011