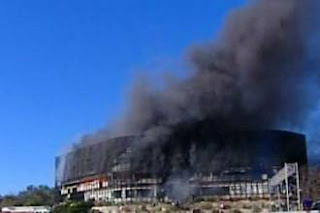 Thick black and gray smoke was billowing out of the second and third stories of the building
Austin, TEXAS (Al Arabiya, Agencies)

A small plane smashed into a seven-story federal building housing U.S. tax offices in Austin, Texas on Thursday and media reports said it may have been a deliberate attack.

Two people were taken to the hospital after the crash, which left the building in flames, and one person was believed to be missing, Austin fire officials said. The fate of the pilot was not immediately clear.

The incident renewed fears of domestic terrorism and gaps in security for private aircraft, although U.S. officials said they had no reason to believe that terrorism was involved.

CNN reported the pilot had set his own house on fire before taking off in the plane and crashing it into the building at about 10 a.m. CST (1600 GMT).

A federal law enforcement source said authorities believed the pilot to be Joseph Andrew Stack and that they were trying to verify that he left behind a long rambling suicide note.

"Well, Mr. Big Brother IRS man, let's try something different; take my pound of flesh and sleep well," the note said. It was not possible to determine the authenticity of the note, dated Feb. 18, or its authorship.

The authorities were also investigating reports that Stack burned down his own house before taking off, the law enforcement source said.

Austin Police chief Art Acevedo declined to confirm details about the note but stressed that there was no threat to public safety. "This is an isolated incident here. There is no cause for alarm," he said at a televised news conference.

The plane, identified by the Federal Aviation Administration as a single-engine Piper Cherokee, took off from the airport in nearby Georgetown and was flying under rules that did not require the pilot to maintain contact with air controllers.

A Piper aircraft was registered to Joseph Stack under a Lincoln, California address, according to the FAA's registry. In the note, Joe Stack said he had moved to Austin from California.

The building housed IRS offices with about 190 employees, including the criminal investigation division as well as auditors and tax collectors, according to agency officials. It sits across the street from an FBI office.

In Washington, White House spokesman Robert Gibbs said the incident did not appear to be linked to terrorism but he said President Barack Obama had been briefed about it.

As a precaution, two F-16 fighter aircraft were scrambled after the crash and patrolled above the Texas state capital, according to North American Aerospace Defense Command which is responsible for guarding U.S. airspace.

"This response from NORAD is a prudent precaution and consistent with our response to recent similar air incidents," said Jamie Graybeal, a spokesperson for NORAD.

The crash and burned out building brought back memories of the Sept. 11, 2001 attacks in which hijackers crashed commercial jetliners into the World Trade Center twin towers in New York and the Pentagon outside Washington.

In a separate incident on Thursday, a United Airlines flight from Denver to San Francisco was diverted to Salt Lake City because of a threatening note found aboard, according to local airport officials. The passengers and luggage were being rechecked while the plane was also examined, the agency said.