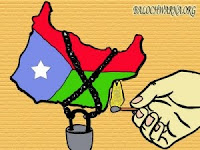 Mr Ismael Amiri said this while talking to BBC Urdu from Bangkok, he further said that Malik Regi is not a terrorist but he was fighting for the right of Sunni Muslim and Baloch people under Iran’s occupation. He said there are more than Four Million Baloch in Iranian occupied Balochistan and majority of them are Sunni Muslim that is why the Iranian (Shiite) government is committing atrocities against Baloch people. Malik Regi is a representative of the Baloch People [in western Baluchistan] and he was forced to adopt the arm resistance against the Iranian authorities [to defend his people].

Earlier Iran has accused that Malik Regi was hiding somewhere in Pakistan and that Pakistani authorities were supporting him. According to BBC report this is the first time that a Baloch organisation has given a statement in favour of Regi.

However the conference in Bangkok remained silent on Regi’s arrest. The organiser of the conference Mr Munir Mengal refused point blank knowing Regi and avoided passing any comments against his arrest.