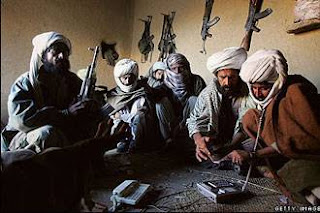 DUBAI (Saud al-Zahid)
Iran‘s Sunni insurgent Jundullah group said on Monday it would resume armed operations against the Islamic Republic after the failure of negotiations with Tehran and called on other ethnic groups in country to join the fight.


Jundullah engaged in negotiations with Iranian authorities for the first time ever at the request of local tribal leaders, the group revealed in a statement obtained by Al Arabiya. But the talks failed because the government pursued a policy of procrastination in responding to the nationalist and doctrinal demands of the Baluch population in the southeastern province of Baluchistan, it added.
The talks came following a suicide bombing that claimed the lives of more than 40 people, including 15 commanders of Iran’s Revolutionary Guards last October in Pishin district near the border with Pakistan, the group said.
The Iranian government did not confirm or deny talks with Jundullah. If confirmed, the talks would be the first of its kind, marking a significant shift in Tehran's policy toward ethnic and doctrinal armed groups in the country as it has consistently rejected any sort of engagement with opposition groups.
Undeclared truce "The movement raised basic, legitimate, logical and reasonable demands in order to solve problems in the (Baluchistan) region and continued to negotiate in good faith and committed throughout this period to an undeclared truce and to the halt of all military operations," the group said in its statement.
The group added that it would give the government in Tehran a "last opportunity" to respond to its demands before it would resume its attacks in the Baluchistan region, stressing it would use suicide operations.
Tehran considers Jundallah a terrorist organization linked to U.S. and Pakistani intelligence, and accuses it of targeting Iranian civilians. But Jundullah says it attacks military and government targets only in defense of nationalist and religious rights of the Baluch people.
Jundallah called on other Iranian ethnic groups such as Arabs, Kurds and Turkmen to join the fight against the Iranian government by launching their attacks from Kurdistan, Khuzestan and Turkmen desert regions.
(Translated from Arabic by Mustapha Ajbaili)
http://www.alarabiya.net/articles/2010/02/15/100476.html
Posted by Mohim Baloch at Monday, February 15, 2010