BALOCHISTAN: Summary of First Day of the Bangkok Conference 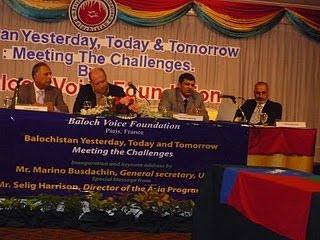 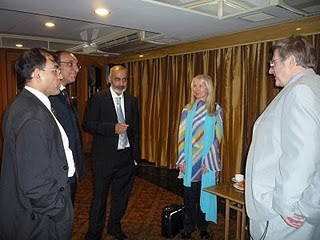 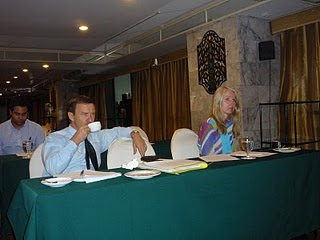 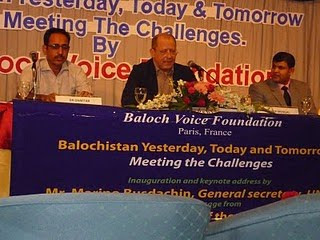 First Day of the Conference

Paris-based Baloch Voice Foundation is hosting a three-day international conference on 22-24 February 2010 in Bangkok. It is being attended by leading Baloch activists from Pakistan and from around the world. Human Rights activists from Hong Kong, the U.S. and Europe are also attending it.

The first day of conference began with a protest by some Pakistanis in front of the hotel where the conference is being held. There were about a dozen protesters carrying placards which said “Stop the Event”, and “We reject Feudal Lords”, assuming the meeting was a forum for Baloch sardars and feudal lords. Ironically, inside the conference hall, there was an unanimous position that the days of the Sardars were over and a new generation of Baloch leadership is emerging on the horizon to lead the Baloch resistance movement.

Marino Budsachin, Secretary General of United Nations and Peoples Organisation (UNPO), the international NGO based in New York, delivered the keynote address and held that the Baloch grievances against the Pakistan state were genuine and their demand for independence was justified. However, he made an assessment of the regional and global scenario and advised the Baloch leadership to take note of the hurdles on the way. Pointing out the brutal records of the Pakistan army and the lack of international concern for the Blaoch cause, Mr Busdachin said that the Baloch should aim at autonomy first and then think of independence for themselves. In his message to the conference, Selig Harrison, noted American political analysts and expert on Balochistan, deplored the acts of repression by the Pakistani state and harped on the critical necessity of raising a common political front and consensus on programme of action for the Baloch movement to be successful.

In his initial presentation, Munir Mengal summarised the five different phases of the Baloch struggle for independence and held that the salient features of the movement were: Baloch constitute a “nation” in fullest sense of the term and had a common ethnic bond and common historical experience; from the 17th century until 1948 Balochistan maintained its independent status, when it was annexed forcibly into Pakistan; despite the use of brutal force to suppress the Baloch movement, the Balochis have shown greater devotion and commitment to their just cause; Pakistan wanted the territory and not the people of Balochistan; and that There is an increasing realisation that we need to come together, forget our differences and work towards the singular goal of ‘Independence’. He quoted the statement of Baloch rebel leader Allah Nazar to indicate that Balochis would prefer death to living under indignity and suppression.

The message of Khan of Kalat Suleman Dawood, which was read out by Tariq Baluch, his representative to the conference, held that independence was the only way available for the Balochis at this critical juncture of history. He emphasised the need for unity and said that armies can defeat armies but can never defeat a nation. Mr Baluch argued forcefully that the Baloch nation was deceived by Pakistan throughout history. He was critical about the role played by the Sardars and held that the situation had changed a lot during the last few years and especially after the killing of Nawab Bugti in 2006. He hoped that the new generation of leadership would be able to show the way forward.

Ismail Amiri, Baloch activist from Seistan-Balochistan in Iran, argued that the condition of over 4 million Balochis in Iran was also equally bad and urged international community to take note of the miseries and sufferings of the Baloch people at large.

The second working session was devoted to the impact of Baloch conflict on human rights situation. It began with an emotional appeal by Ali Arjumandi, brother of one Ehsan Arjumandi, who disappeared under custody, to take note of the excesses being perpetrated in Balochistan by the Pakistan security forces. Baseer Naweed from the Asian Human Rights Council (AHRC) made a detailed presentation of the cases of human rights violation in Balochistan and said that study of several cases of missing persons and torture by the AHRC revealed state complicity in most of the cases. He was critical of the justice delivery system in Pakistan and said that it required public awareness and constant vigilance and appeal to put pressure on the security forces and the government. The participants in the conference agreed that it was difficult to get justice in Pakistan in the prevailing circumstances in Baochistan. Munir Mengal, who had himself experienced forced detention and torture held that Baloch nation had lost all its faith in Pakistan and had no other alternative but to take radical measures to protect their identity and genuine rights and interests.