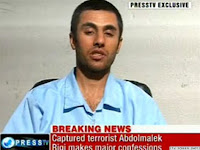 The United Arab Emirates on Friday denied the claims made in some Iranian media reports that Abdul Malik Rigi the leader of Junallah rebel group, was arrested in Iran after his entry to Dubai, the official WAM reported.

A senior official at the Ministry of Foreign Affairs said dismissed the reports as "inaccurate and lacking credibility."

"The man, whose name appears in the visa shown by the media, had never entered the country. He made a two-hour stop-over in Dubai as he arrived from Kabul en route to Kyrgyzstan, without using the entry permit," Sultan al-Ali, Director of Media Affairs at the Ministry said, as quoted by WAM.

The senior official reiterated UAE's respect for the principle of non intervention in the internal affairs of other countries which constitutes a major pillar in the country's foreign policy.

Rigi meanwhile said in a "confession" aired on state television Friday that the United States offered to provide him with military aid to battle the Islamic regime.

Rigi's arrest, which Iran touted as a blow to the United States and Britain, came as Tehran faces pressure by world powers and the threat of tougher sanctions over its controversial nuclear program.

"They (Americans) said they would cooperate with us and will give me military equipment," Rigi said in a pre-recorded statement broadcast on Iran's state-run English-language Press TV.

"They also promised to give us a base along the border with Afghanistan near Iran," said the ringleader, stubble-faced, wearing blue prison pajamas and speaking in Farsi.

Rigi was seized on Tuesday after Iranian warplanes reportedly forced a flight from Dubai to Kyrgyzstan to land in Iran.
It was not clear under what conditions the confessions were extracted from Rigi, whose group the Jundallah has waged a deadly insurgency in southeastern Iran killing military officials as well as civilians.

Rigi said in his taped statement that he was on his way to meet a "high-ranking American person" in Kyrgyzstan.

He added that Americans met him in Pakistan around March 2009 and had also sought a meeting "after the last major operation we took part in."

He was apparently referring to the October 2009 suicide bombing in the provincial town of Pisheen that killed 42 people, including seven Revolutionary Guards commanders and several tribal leaders, which was claimed by Jundallah.

"The Americans said Iran was going its own way and they said our problem at present is Iran ... not al-Qaeda nor the Taliban," Rigi said.

Iran has repeatedly accused archfoe the United States of backing the group.

Washington dismissed as "totally bogus" claims on Tuesday by Iranian Intelligence minister Heydar Moslehi that Rigi had been issued an Afghan passport by the "Americans" and had met a NATO military chief in Afghanistan.

Jundallah says it is fighting Tehran's Shiite rule to secure rights for Sunni Baluchis who form a significant population in Sistan-Baluchestan -- the restive province on a major narcotics-smuggling route bordering Afghanistan and Pakistan.

Soon after the October bombing, Revolutionary Guards chief Mohammad Ali Jafari demanded that Islamabad hand over Rigi because Tehran had "proof" he was backed by Pakistan's intelligence agency.

Pakistan's ambassador to Tehran, Mohammed Abbasi, told reporters earlier this week that Islamabad had helped to capture Rigi and that he was detained outside Pakistan. He gave no further details.

Iran accuses the United States, Britain and Israel of inciting unrest seen in recent years in some of its border areas populated by ethnic minorities.