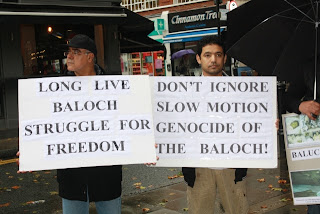 A Statement by the Asian Human Rights Commission

Recent killings include that of a journalist and 24 others

It has been reported during the recent weeks that in the province of Balochistan the mutilated bodies of 25 persons, who had earlier been abducted by persons in plain clothes, have been found. The deceased person's family members claim that these people were abducted by personnel of the Frontier Corp (FC) and intelligence agencies. Some of them were arrested in the presence of police but despite this, in many cases the police refused to lodge the First Information Report (FIR) because of the involvement of state intelligence agencies.

In Balochistan there is a strong movement for autonomy by the people who want their share of the province's natural resources. They also want a say in local governance which has never been allowed by any government. The Pakistan Army has conducted five operations to control the province through the construction of Cantonments and by the use of aerial bombardments. During the regime of the former military ruler, General Pervez Musharraf, the Pakistan army conducted operations against the nationalist leaders for almost seven years. In 2008 the civilian government called off army operations but handed over the responsibility for law and order to the FC, a Para-military organization. This effectively made the police subordinate to the FC who has the support and assistance of the army.

On November 18, on the eve of the Muslim Eid festival, the mutilated body of a young journalist, Mr. Abdul Hameed Hayatan, alias Lala Hameed, was found beside the River Sami in Turbat, Balochistan. He had been abducted from the south western port city of Gawadar on October 25. Reporters without Borders (RSF) while condemning his extrajudicial killing said that his reporting had been critical of the Pakistani authorities and that this, and his support for the Baloch national movement were almost certainly the motive for his abduction and murder. The Pakistan Federal Union of Journalists said in a press release that Lala Hameed was on his way to Gawadar on a motorcycle with a friend after attending the wedding party of a relative in Dasht (Bairy) when he was kidnapped. Both were allegedly arrested at a security forces check point in Karwaat region near Gawader and since then had been missing. Lala Hameed's friends and family members believe that they were arrested and disappeared by security agencies.

On the occasion of the Eid festival six more bodies were found abandoned in various parts of the province. Among them there were two persons who were missing after their abduction, allegedly by the intelligence agencies in the presence of the FC. Among the bodies were those of Samiullah Mengal, a student, and Hamid Ismail Baloch, a Baloch activist. In the pocket of one of the men a note was found saying that this was the Eid festival gift to the families of the deceased.

On November 23, the mutilated bodies of five unknown persons were found from a dried river bed leading down from the Yaroo and Katwal of Bostan mountain areas. It is thought that the persons had been killed two to three months earlier and dumped in the river.

Among the latest victims of the ongoing violence are Faqir Mohammad Baloch and Zahoor Baloch, whose bodies were discovered in the district of Mastung on October 21, 2010. Faqir Mohammad Baloch, a poet and member of the Voice of Baloch Missing Persons, was abducted on September 23. Zahoor Baloch, a member of the Baloch Student Organization-Azad was abducted on August 23. According to media reports, both received a single bullet wound to the head at point blank range and their bodies showed signs of torture.

Other recent victims of the violence include Mir Nooruddin Mengal, a member of the Balochistan National Party's (BNP-M) Central Executive Committee who was shot dead by unidentified men near his home in Gharebabad, near Kalat Bazar on October 13. Yasin Baloch, a member of Voice of Baloch Missing Persons and brother of Mujeeb Baloch, senior member of BSO-Azad, who had also been abducted, was shot by unidentified gunmen near Roshare Kalat on October 10. The victims' relatives and activists openly accuse the Pakistani security forces and intelligence agencies of carrying out these extrajudicial killings.

Mr. Zaman Marri, (38), a lawyer by profession, was abducted on August 19, 2010 near his law office on Jinnah Road, Quetta, the capital of Balochistan province, while he was on his way home to Killi Kamaloo, in the outskirts of Quetta. On September 5, Zaman Marri's bullet-riddled body was found in the Ghuncha Dhori area of Mastung city, 40 kilometers away from Quetta city. His body was so badly mutilated it could not be immediately identified.

Mr. Zaman Marri was also pursuing a case on behalf of his cousin, Mr. Ali Ahmed Marri alias Alliya Marri, who was arrested by plain clothed persons on April 7 along with three friends, Kamal Khan Marri, Lala Marri and Lal Mohammd Marri. On September 11, Alliya Marri's mutilated body was found in the same area where Zaman Marri's body was found.

On October 18 a young boy, Master Abdul Majeed, (14), son of Haji Mohammad Ramzan Zehri, a well known trader, was abducted, allegedly by the Frontier Corps, as claimed by his family, and on October 24 his body was found in Koshak river at Khuzdar district. There were bullet wounds on his head and chest. He was an activist of the Baloch Student Organisation Azad and was a student in class eight.

Another student, Master Mohammad Khan Zohaib, (14), also an activist of Baloch Student Organisation Azad, was abducted in July by plain clothed persons riding in a black coloured Sarf pickup, which is generally used for abductions by the state intelligence agencies. His bullet riddled body was found In Khuzdar, Balochistan province, on October 20. His family members claim that he was arrested by personnel from the FC for having links with militants who are fighting for the greater autonomy of the province.

On September 23, the bullet riddled body of the missing Baloch lawyer Ali Sher Kurd was found in Khuzdar district. Kurd was reportedly abducted by Pakistani intelligenge agents three days before. His neck was broken and his body showed marks of torture.

Maula Baksh Dashti, a key figure in the Balochistan National Party and a former district Nazim (Chief Official) of Kech (Turbat) District was shot dead on July 11, by unidentified gunmen in his native district.

Former Senator Habib Jalib Baloch, Secretary General of the Balochistan National Party-Mengal (BNP-M) was assassinated in the Parkaniabad area of Quetta on July 14, by three gunmen on a motorbike. He suffered seven bullets to the neck and chest and prior to his death had been receiving threats.

On July 20, a leading member of the BNP-M, Liaqat Mengal, was shot dead, also by three gunmen on a motorbike near his house in the Kalat district of Balochistan.

The bullet riddled bodies of two cousins, student Ashfaq Ahmed Mullahzai and Muhmmad Farooq Mengal, were recovered in Quetta on July 26, in the Kili Qambrani area. Their relatives claim they had been abducted in May 2010.

The extrajudicial killings started in Balochistan after the warning from the federal minister of interior to the nationalists and militants that the government will not tolerate anymore anti state activism and would take any action they deemed necessary.

The media of Balochistan claims that not a single day goes by without disappearances or the dumping of bodies of missing persons. The same type of warning was given by General Musharraf to the leaders of the nationalists that they would be hit in such a way that they could not expect. After his warning the main leader of the Baloch nationalist movement, Sardar Akbar Khan Bugti, was killed in an aerial bombardment and a strong military operation was conducted in which planes of the Pakistan Air Force and army gunship helicopters were used.

It is felt that the extrajudicial killings are being carried out to provoke militancy in the province which would justify a severe response by the armed forces.

The Government must take immediate steps to stop the large scale assassinations and disappearances taking place in Balochistan. Immediate steps must be taken to inquire into the killings and lawlessness prevailing in this area. The government must take extraordinary steps to stop this carnage. United Nations human rights agencies should also regard the situation in Balochistan as an exceptional one and must work towards getting the situation under control. The United Nations Special Rapporteur on extrajudicial killings should seek an opportunity to visit the region and to inquire into the matter. Local and international human rights organizations should demand immediate action from the government and the international community to deal with this extraordinary situation.

About AHRC: The Asian Human Rights Commission is a regional non-governmental organisation monitoring and lobbying human rights issues in Asia. The Hong Kong-based group was founded in 1984.