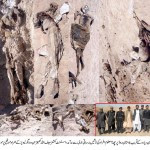 QUETTA: A new chapter in the killing of “missing persons” unfolded other day after five more decomposed bodies of unidentified persons were found in a deserted place between the settlements of Bostan and Yaru in Pishin District on Tuesday.

All victims had received bullets in their heads and presumably died on the spot. The bodies are beyond recognition as doctors said they had been killed at least two months ago.

According to Levies force officials, a shepherd first spotted the dead bodies at the desolate place and informed the them about it. Levies and other officials of law enforcement agencies rushed to the venue and took the bodies to nearby hospital and later shifted them to Bolan Medical Complex (BMC) in Quetta for further proceeding.

“We have brought the bodies to the Sandeman Hospital but because of law and order situation shifted it to BMC,” Investigation Officer Mohammad Mustafa said.

The bodies are completely decomposed and parts of them had been eaten up by the wild animals and birds, doctor and hospital sources confirmed that it was impossible to carry out postmortem.

He said chemical powder was sprayed on the bodies accelerating the process of decomposition of bodies.

According to eyewitness accounts, there were six dead bodies and one of the bodies was completely eaten up by wild animals and stray dogs. They were killed some two months ago, doctors opined.

The highly worried relatives of missing persons rushed to the hospital after being informed about recovery of dead bodies in such a large number. However, they could not identify any one as the bodies were completely disfigured and beyond recognition.

“I felt the smell and saw the remains of human beings, I think they were Balochs,” the shepherd who first spotted the dead bodies told local journalists and officials.

It could not be ascertained soon that whether they were missing persons because officials were completely blank on the issue.

According to sources, around 50 dead bodies have so far been recovered in parts of Balochistan during the past two months and all the victims were killed in similar manner by shooting in their heads and by bashing their skulls. Majority of them had been identified as Baloch missing persons who went missing for months. Close relatives identified them.

While commenting on this issue, Home Secretary Akbar Durrani said that 90 percent of relatives did not allow the police and investigating officer to carry out postmortem and nor relatives lodge First Investigation Report (FIR) regarding disappearance. Hence, the Provincial Government was facing difficulty to book the culprits involved in these heinous crimes.

Asked about the allegations about extra judicial killings off and on, the Home Secretary said that government does not allow any one to take law into their hands.

Another nine dead bodies of Baloch political workers and activists had been recovered in different parts of Balochistan days after the Muslim festival of Eid.