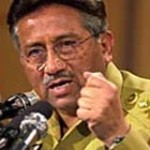 Former military dictator General Pervez Musharraf has once again defended his decision to carry out a military operation in Balochistan and kill the province’s former governor as well as the chief minister, Nawab Mohammad Akbar Khan Bugti, 79. He said in an interview with senior journalist Munizae Jahangir that the military operation in the province was “500%” justified. He termed all those people who oppose parliamentary politics in the province as “anti-Pakistan” who, according to him, “will be” , “should be” and “must be” punished before they convert Pakistan into a banana republic.

The sixty-seven year old retired army chief blamed India for the unrest in Balochistan. He alleged the head of Baloch Republican Party (BRP), Nawabzada Bramdagh Bugti, who is a grandson of late Nawab Akbar Bugti, regularly visited India via Afghanistan to destabilize Pakistan.
The interview clearly indicated that General Musharraf was not apologetic at all about his belligerent policies in Balochistan which totally changed the dynamics of politics in the gas-rich province. The interviewer showed the former president the video tape of a young Baloch political activist who previously belonged to the moderate pro-Islamabad National Party but had now decided to join the Azad faction of Baloch Students Organization (BSO). The young activist said he never supported violence in the past but felt that the government was continuously hitting him with the wall. In response, General Musharraf instantly issued a fatwa declaring the lad as “anti-Pakistan” who “must be” stopped at all costs.

Musharraf’s latest remarks were the most hostile and offending since he had publicly scorned the Balochs. “It is not the ’70s,” he had thundered even before the killing of Nawab Bugti in a television interview, ” We will hit you in a way that you won’t know what hit you and from where.”
Musharraf had spoken with the same level of smugness in a U.S private university some time back when a Baloch activist had shouted at him. In return, Musharraf told him before the august audience, “if you were in Balochitan, I’d fix you too.”

That was in fact the official pronouncement of a military operation in Balochistan which led to the killing of top Baloch nationalists, arrest of senior political leaders like Sardar Akhtar Mengal, freezing the bank accounts and enlisting the names of Baloch leaders on the Exit Control List (ECL).

While there has been a steady demand by the people of Balochistan that General Musharraf should be punished for the crimes he committed against humanity and ordering the murder of an aged ex-governor and chief minister of the country’s largest province, adoption of such rhetoric by a man who is planning to start a political stint is very disappointing.

On the one hand, Musharraf should be brought to justice by the ruling Pakistan People’s Party to mitigate the Baloch anguish, Musharraf, on the other hand, should voluntarily extend an unconditional apology to the people of Balochistan for the policy blunders he committed in the enraged province. This may not fully help in normalizing the situation in the province but it will at least give him some kind of moral legitimacy to start a political journey.

Meanwhile, former prime minister and the head of country’s main opposition party, the Pakistan Muslim League (PML-N) Mian Nawaz Sharif also called for a political solution to Balochistan’s problems during a recent visit to the province. Sharif, who was ousted from power by Musharraf following a bloodless coup on October 12, 1999, rightly argued that no solution could be hammered out on gun point. He criticized Musharraf for continuing to threaten the people of Balochistan in spite of living outside Pakistan which means that the former military chief intends to carry out a similar genocide of the Baloch people if he is once again given a chance to rule the country.

General Musharraf should realize that this is not a civilized way of dealing with the people of a country he ruled and intends to rule again by entering into politics. Balochistan was in fact a far different place before 1999 when General Musharraf took over power. There were hardly serious issues of law and order, target killings or abduction of political workers. Likewise, not many young people supported the idea of an independent Balochistan or said that they no longer trusted the parliament. As a matter of fact, the nine years of Musharraf’s misrule left irremovable marks on the Baloch society and politics. He only planted the seeds of hatred, alienation and disillusionment.

President Asif Ali Zardari and PML chief Mian Mohammad Nawaz Sharif as well as the national media and civil society should come forward to discourage and condemn Musharraf’s bellicose statements on Balochistan. It is true that tens of thousands of Balochs today have lost faith in the parliament. If General Musharraf think he was “500%” justified to kill one Bugti then is he going to kill all those tens of thousands of Balochs who have lost hope from the parliament? That is not that art of statesmanship, is it?