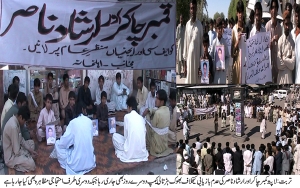 Occupied Balochistan: A protest rally was organised, in Karachi, against the abduction of BSO-azaad central member Chakar Qambar and his cousin Arshad Baloch. BSO-azaad had given the call for the protest.

According to information BSO Karachi, Malir and Gadap zones have begun the protest rally from “Karachi Art Council” to “Karachi Press Club” against the abduction of Baloch people by the state of Pakistan. It is worth noting that in the last few days the discovery of decomposed bodies of Baloch missing persons and abductions of Baloch political and student activists has increased. The Baloch Nation has received some decomposed bodies even on the Eid Day (Islamic celebration day) who had been abducted by Pakistani intelligence agencies.

Two days ago the abduction of BSO-Azaad’s CC member Qamber Chakar Baloch and his cousin are also the continuation of past crimes of the state. His house was surrounded by Security forces at 3 am in the early morning. The uncivilised Pakistani security forces disregarding the sanctity of the Baloch household have barged into the house and abducted Chakar Qambar Baloch.

According to information a fair number of people including the families of Qamber Chakar (CC member BSO-azaad), Arshad Nasir (BNM Turbat zone joint secretary), Ghafar Dashti (BNM Turbat activist) and Master Satar Punjgori attended the protest. The protesters showed their anger on the cold-blooded murder of the Baloch Missing persons and dumping their decomposed bodies.

The brother of Arshad Nasir, Mr Imran Baloch, and the brother of Gafar Dashti, Mr Sattar Baloch, while addressing the participants said that Pakistani intelligence agencies abducted their brothers for the crimes that they did not commit. They said they were holding the peaceful demonstration against the abduction of their brothers and other enforced disappeared Baloch activists. They further said that there was hardly any home left in Balochistan where the intelligence agencies of Pakistan had not abducted one of their loved one. In the end they appealed the Amnesty International and other International Human Right Organizations to play their effective role for the save release of Qamber Chakar, Arshad Nasir, and other Baloch Missing Persons from the custody of Pakistan authorities.

In addition Qamber Chakar, Arshad Nasir, Master Sattar and Ghafar Dashti‘s relatives set up a protest camp for the save release of their loved ones. According to information families of abducted Baloch have launched hunger strike protest camp at Shaheed Fida Chowk. They displayed the picture of the victims of enforced disappeared Baloch. A large number of people visited the camp to express their solidarity with the families of Baloch missing persons.