The chief minister's acceptance that the military is disappearing and killing citizens is appalling: HRW 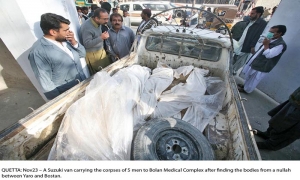 By Ahmed Raza and Riaz Sohail

Sardar Aslam Raisani told the BBC some of the political killings were "definitely" by security agencies.

Human rights organisations say kidnappings and murders of political dissidents are at an all-time high in the province.

Balochistan has been at the centre of a decade-long insurgency.

Mr Raisani, an influential tribal leader, is a member of the country's ruling Pakistan People's Party, but anti-government feeling runs high among voters in Balochistan.

"Some of the abductions and killings are definitely carried out by security agencies," Mr Raisani told the BBC in an exclusive interview in Islamabad.

He also stressed that some of the deaths were the responsibility of tribesmen who have been fighting for greater political autonomy.

"They [insurgents and security agents] have been targeting each others' activists," he said.

Human rights campaigners said they were astounded by the chief minister's candour.

Ali Dayan Hasan, of Human Rights Watch, told the BBC: "The chief minister's casual acceptance that the military is disappearing and possibly killing citizens is preposterous and appalling.

"He should be seeking to hold military intelligence agencies accountable rather than appearing to give them sanction for a policy of disappearances and summary execution."

Besides being the largest of Pakistan's four provinces in terms of area, Balochistan is also rich in minerals.

But many of its people feel they have been systematically discriminated against by the federal government.

The province saw its first major rebellion in the 1970s, when at least 10,000 people are estimated to have died.

Rebellion erupted again in 2000, when some of the insurgent leaders returned from exile in Afghanistan.

Since then a crackdown has continued on insurgents across the province.

Hundreds of Baloch people have disappeared in what human rights organisations say are state-sponsored abductions.

The rebel leaders have repeatedly refused to talk to the government, despite several offers.

Some of these overtures have been from the president and prime minister.

The insurgents claim the army is really in charge and has double standards when it comes to Balochistan.

"So many people have been killed in Karachi, but is the army carrying out an operation there?" asked Ataullah Mengal, chief of the Balochistan National Party [BNP] and former chief minister of the province.

"In Balochistan, however, it's the army and ISI [intelligence service] who are completely in control. They detain people in broad daylight.

"Later their mutilated bodies are found in ditches with the words 'this is an Eid [Muslim festival marking end of Ramadan] gift for Balochistan' carved on their chests."

Mr Mengal is said to be close to the rebels; his own son was held without charge for several months by security forces.

The opposition leader and other rebel leaders say the army has spilt too much blood for them to return.

He says they will settle for nothing less than independence from Pakistan.