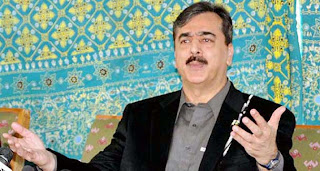 ISLAMABAD: Prime Minister Yousuf Raza Gilani brushed aside on Thursday criticism over presentation of the Balochistan package in a joint sitting of the two houses of parliament, without giving autonomy to the province.
PM Gilani rejected the impression that a section of the political leadership had rejected the Balochistan package, and added that it was presented in the parliament to “fine tune” it besides media acting as a witness. – APP/File Photo
‘It is for me to decide when a thing is to be done,’ the prime minister said at a press conference, adding that suggestions made by legislators during a debate in parliament would be incorporated into the final document.

He said the proposals in the package pertained to rights of the province and its people.

He said the government’s offer of talks was open to all Baloch leaders, including Brahmdagh Bugti and Talal Bugti.

When asked if talks would be held also with those charged with heinous crimes, Mr Gilani said politics was a day-to-day affair and he himself had faced allegations in the past.

When asked how would the government bring back estranged Baloch leaders, the prime minister said he was constantly in touch with the Baloch leadership.

He agreed to a suggestion that a committee of parliamentarians be set up to hold negotiations with Baloch leaders to bring them back into the national mainstream.

The prime minister claimed that implementation of the ‘Aghaz-i-Huqooq Balochistan’ package had started and some missing persons had been traced, while others would be found soon.

Replying to a question, he said the government would welcome former prime minister Nawaz Sharif’s mediation on the Balochistan issue.

In reply to a question about India’s role in militancy in Balochistan and tribal areas, he said he had raised the issue with the Indian prime minister in Egypt and the matter would be taken up again at an appropriate forum and time.

US Afghan policy
The prime mister said the US should consult Pakistan before finalising its new strategy for Afghanistan in order to ensure political stability in the country which was interlinked with stability in Pakistan and the region.

He said that although a decision on dispatching more American troops to Afghanistan was for the US government to take, Pakistan had raised the issue because their deployment in the Helmand province would increase infiltration into Balochistan and fuel militancy.

‘Sending more American troops will severely affect Pakistan’s interests if it is done without consulting us,’ he said.

The prime minister said US Secretary of State Hillary Clinton had been told in clear terms during his recent meeting with her that Pakistan’s viewpoint should be heard before the new Afghan policy was announced.

Reuters adds: The prime minister said President Asif Ali Zardari had asked President Obama to consult Pakistan on his Afghan policy. He said consultations should be held ‘with our intelligence- and defence-related officials so that we can formulate our strategy accordingly.’