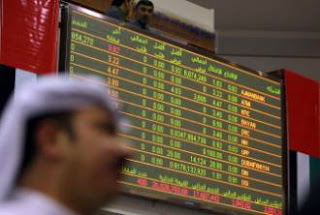 Stock markets in the Gulf emirate of Dubai and its neighboring capital of Abu Dhabi fell sharply on Monday and then ground to a halt amid a lack of buyers after Dubai World's shock proposal to suspend debt payments.

Dubai's benchmark DFM Index dropped by 7.30 percent as leading securities, including construction and finance, plunged almost by the maximum-allowed limit of 10 percent at the opening, which followed the four-day Eid holiday.

" This was expected because markets have panicked over exaggerated reports in the Western media "
Al-Fajr analyst Hamam al-Shamaa The market was trading in the midday session at 1,940.36 points, down 152.80 points from Wednesday's close, just before the Dubai government's shock announcement it wants to freeze debt repayments by Dubai World conglomerate for at least six months.

The DFM Index finished trading on Wednesday at 2093.16, up around 28 percent this year, though still two-thirds below its all-time highs two years ago.

The two markets have so far shed around $10 billion of their market capitalization.

Trading almost froze in both markets amid high offers to sell and negligible offers to buy, with Dubai market registering only 31.5 million dirhams ($8.6 million) in turnover -- less than 10 percent of average daily trade this year.

"This was expected because markets have panicked over exaggerated reports in the Western media," Al-Fajr analyst Hamam al-Shamaa told AFP.

"We expect to see many foreign portfolios withdrawing from the market. Their exit obviously terrifies local investors," he said, adding that the drop will continue on Tuesday.

"I do not expect investors to enter the market. Tomorrow will most likely be a similar day," he added, pointing out that the markets go into another four-day holiday starting Wednesday.

But he expected local markets to bounce back after the holiday. "I expect good news during the holiday," he said.