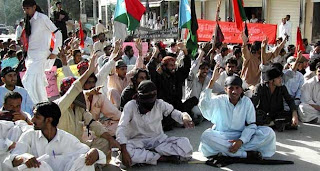 Started soon after the military takeover of Gen Pervez Musharraf, the Baloch popular resistance to oppression is now entering its 10th year.

In the last nine years there have been tall claims and promises by successive governments that Baloch grievances and demands for the right to self-rule will be addressed according to the wishes of the people of Balochistan. But none of these have been fulfilled.

The Baloch uprising is a grassroots mass movement organised by Baloch nationalist parties, initially started when the military regime aggressively expanded its control through constructing more military cantonments and exploitation of natural wealth in the province.

The movement aims to stop Islamabad’s harsh policies, practices and oppressive measures that have affected every aspect of Baloch life, including all social and economic aspects, and have threatened the very existence and survival of the Baloch people.

The Baloch political movement against Islamabad intensified when the central government, ignoring all basic developmental and participatory norms, handed over Saindak and the construction of Gwadar seaport to Chinese companies.

It is universally accepted that inequitable distribution of resources, wealth and power among culturally defined groups, such as ethnic and religious groups, will provoke a high level of unrest.

Perhaps the intensity of inequality in various ways leads to violence and rebellion. The grievances and anger generated by discrepancies in conditions and expectation shortfalls are the main causes of violent political reaction in the province.

The increasing ‘horizontal inequalities’ are well documented by leading international and domestic organisations. The World Bank recently released the Balochistan Economic Report 2009, which took into account statistics from 1972-73 to 2005-06.

The report says the province’s economy expanded 2.7 times in Balochistan, 3.6 times in the NWFP and Sindh and four times in Punjab. Overall, the size of the ‘economic pie’ rose 110 per cent in the rest of the country, except Balochistan.

The report also says that poverty in Balochistan has risen and it stands out as the province with the worst social indicators. It scores lowest in 10 key indicators for education, literacy, health, water and sanitation for 2006-07.

The Human Development Index (HDI) is the best-known measure of development and has three basic dimensions: (i) a long healthy life, as measured by life expectancy at birth; (ii) knowledge, as measured by the adult literacy rate; and (iii) a decent standard of living, as measured by GDP per capita.According to the UN’s recent human development report about Pakistan ‘there is considerable variation across provinces with respect to HDI. Among the districts, Jhelum (Punjab) has the highest HDI rank at 0.703 and Dera Bugti, the resource-rich district of Balochistan, is the lowest at 0.285’.

Unsurprisingly Balochistan and its districts were assessed to be the worst off in Pakistan. Amongst the top 31 districts with the highest HDI, Punjab had by far the largest share at 59 per cent, while Balochistan lagged far behind at nine per cent. For comparison, Sindh had a 13 per cent share and NWFP 19 per cent.

The Pakistan Integrated Household Survey 2005-06 revealed that 58 per cent of the population in Balochistan lives below the poverty line. A study conducted by Dr Talat Anwar, a senior development expert, revealed that rural poverty in Balochistan has increased 15 per cent between 1999 and 2005.

Contrast this with the experience of urban Punjab, which saw a nearly four per cent drop in poverty between 1999 and 2005 to stand at 20.6 per cent. Sindh and the NWFP also experienced growing poverty over the same period.

According to the Social Policy and Development Centre (SPDC), ‘overview of the development scene in Balochistan is appalling and the extent of relative deprivation in the province is unspeakable’.

Ninety-two per cent of Balochistan’s districts are classified as ‘high deprivation’ areas compared to 50 per cent in Sindh and 29 per cent in Punjab.

The most devastating consequence of underdevelopment in any society is a high death rate. Balochistan has the highest infant and maternal mortality ratio in South Asia.

According to the federal ministry of health policy paper, Gender awareness policy appraisal 2006, one of the major reasons for the high maternal mortality rate in the province is hunger and malnutrition, which affects 34 per cent of pregnant women.

The infant mortality statistics are equally grim. Successive findings indicate that infant mortality in Balochistan is 130 deaths per 1,000 live births. Compare this to the Democratic Republic of Congo’s average of 126 and Pakistan’s national average of 70.

This discriminatory policy is not only resulting in a slowdown of gender empowerment but is affecting the overall development of the province.

Even the educational institutions that do exist suffer from an acute lack of resources. Sixty-seven per cent of schools in the province have no proper building; while 60 per cent of primary schools have only one untrained and unqualified teacher.

What has grown is the number of religious schools in the province during the tenure of the Musharraf and Muttahida Majlis-i-Amal coalition government.

Deliberately the Baloch youth have been kept deprived of all forms of contemporary education. Compared to the 486 polytechnic, computer science, women vocational institutes and commercial and law colleges in Punjab, Balochistan has only nine poorly developed centres for the urban population of Quetta.

The impact of Islamabad’s policies has been particularly severe in the province. Despite the tall claims no Pakistani government has ceased its exploitation. The current and long-term consequences of this practice pose a serious detriment to the living conditions of the Baloch people, including efforts for sustainable development, and to any prospects for peace in the region.

The writer is a former senator.
balochbnp@gmail.com
Down.com
Posted by Mohim Baloch at Tuesday, November 24, 2009