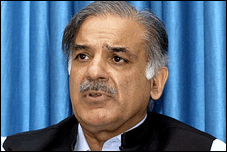 Mr.Sharif urged the international community to take notice of Indian involvement in the turmoil in Balochistan.

“It is everyone’s responsibility to heed Balochistan’s grievances and sort them out,” CM Punjab said while talking to the media on his Balochistan visit.

On this visit CM Punjab has announced to donate Rs. 30 million to Balochistan University.

He added that India cannot cloak its involvement in destabilization of Balochistan.

He recalled that dictators have impaired Pakistan, but not a single dictator belonged to Punjab province.
Posted by Mohim Baloch at Saturday, November 21, 2009