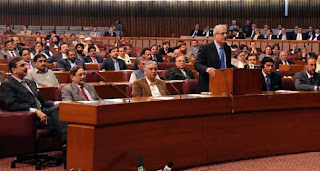 QUETTA: Separatist milis in Pakistan's gas-rich Balochistan province dismissed on Wednesday proposed reforms for ending their decades-old insurgency as insignificant and a trick.

The government's proposals, unveiled in parliament on Tuesday, are aimed at ending grievances in the southwestern province as security forces grapple with a growing Taliban insurgency on the Afghan border in the northwest.

The proposals include the cessation of military operations against the rebels, the release of detained activists - except those involved in 'terrorism' - and payment to the province of $1.4 billion over 12 years in gas royalties.

'Our struggle isn't for such peanuts,' Sher Mohammad Bugti, a spokesman for the rebel Baloch Republican Party, said by telephone from an undisclosed location.
'We want freedom. We want an independent Baluchistan where our people have control,' he said.

The rebels' campaign would go on despite the government's proposals, Bugti said.

'People shouldn't be deceived by such things. It's a trick to weaken our struggle.'

The party is headed by a grandson of veteran Baluch leader Nawab Akbar Khan Bugti, whose killing in a military operation in 2006 led to a sharp rise in tension in the province.

Another rebel leader, Hairbyer Marri, also rejected the government's proposals, which are due to be debated in parliament next week.

'We don't and we won't accept anything short of freedom. We have the right to decide our fate,' Marri said in a statement.

'It's not viable. We demand ownership of our resources not charity from the federal government,' said Abdul Hai Baloch, president of the National Party.

'We should accept the package but continue our struggle because they won't give us our full rights easily,' said government worker Shuakat Ali.

Businessman Aziz Ahmed Magsi said: 'We shouldn't expect anything special from them. We've seen such packages before. It's always on paper but nothing is done practically.'
Down.com
Posted by Mohim Baloch at Saturday, November 28, 2009