Package Out To Heal Balochistan Wounds 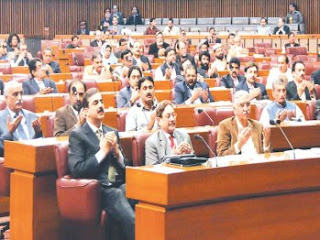 ISLAMABAD – Inviting Baloch nationalist leaders engaged in armed struggle against Pakistan for dialogue, Government on Tuesday tabled Aghaz-e-Haqooq-e-Balochistan Package before the joint sitting of the Parliament pledging provincial autonomy, control over provincial resources, more jobs, settlement of outstanding dues, withdrawal of Army, release of political prisoners and a number of other incentives to appease the people of the province.

After a brief address of Prime Minister Syed Yousuf Raza Gilani to the joint sitting wherein he candidly invited Baloch separatist leaders for parleys, Chairman of the Parliamentary Committee on Balochistan Senator Mian Raza Rabbani presented the 39-point proposed incentives package for the largest but most neglected province before the Parliament on which the discussion would likely be made on December 4 or 5 when another joint sitting of the Parliament would be called.
Senator Mian Raza Rabbani said though package would not be a substitute to provincial autonomy, it would be just a beginning in a right direction. He said that the package would be divided into constitutional, administrative, political and economic portions, while a monitoring mechanism would also be proposed to have a close watch on the implementation of the proposed recommendations to bring change in the lives of people of Balochistan.
Giving a brief background of the committee, Senator Rabbani said that the spirit of the committee was derived from the policy of reconciliation adopted by Shaheed Mohtarma Benazir Bhutto while they had also incorporated the recommendations of Wasim Sajjad and Mushahid Hussain sub-committees of the Parliamentary Committee on Balochistan formed under the head of Ch. Shujaat Hussain.
Under the constitution-related matters, it was proposed to the Parliamentary Committee on Constitutional Reforms to delete Police Order 2002 and Concurrent List from the Fourth Schedule of the Constitution.
It is also recommended to remove Balochistan Local Government Ordinance 2001 from the Sixth Schedule of the Constitution. Making Council of Common Interests effective and NFC Award as reflective to the wishes of all the four provinces was also recommended while effective implementation of Articles 154 to 159 of the Constitution was also proposed.
Under the head of political related matters, the release of all the political workers was recommended and in this connection, Federal Government in consultation with the provincial government would look into these cases.
It was also proposed that a political dialogue would be initiated with all the stakeholders, including those fighting against the state, and steps should be taken for the return of political leaders in exile. However, the cases involving terrorism and those of heinous nature would not be pardoned.
Balochistan Government would be allowed to bring changes in the Local Government Ordinance as per their requirement and all the resolutions adopted by the Balochistan Assembly from 2002 till date related to the provincial matters would be implemented within the legal framework of the Constitution.