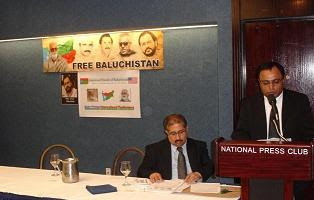 The “American Friends of Baluchistan” organized an International Conference On November 21, 2009 in Washington DC. According to organizers, the main purposes of the conference were to highlight issues in Eastern and Western Baluchistan that organizers and to pay tribute to Baluch leader Balaach Marri, who was slain two years ago. This all-day conference was very well attended with many standing in the back of the meeting room. The venue of the conference was National Press Club in downtown Washington, DC.

The list of persons who addressed or presented papers was long and covered a variety of topics from history of Balochistan to happenings as recent as three days ago.

What Baluch say about their Situation?

Baluch say they had never wanted to be part of Pakistan.

Baluch claim that they were duped by Mohammad Ali Jinnah, who is considered father of Pakistan and engaged by Baluch to negotiate sovereignty and autonomy from British.

Baluch argue that instead of negotiations and redressing their complaints, successive Pakistani governments have engaged in brutal force and unleashed their tyranny through five military operations since 1948.

Baluch point out that in spite of the 1973 constitution that says that complete autonomy within ten years (that is by 1983), not only that provision remains forgotten but more and more centralization has been imposed by strengthening the central government at expense of provinces.

Baluch cite statistics that Balochistan is ruled as colony with 88% of Baluch living under the poverty line, 78% has no access to safe drinking water or electricity, and 79% has no access to gas and their gas is taken to provide to households and industries in other provinces.

Baluch cry that Balochistan has been discriminated and exploited so much that in spite of its immense natural resources they are at the bottom of indices compared to other provinces in literacy rate, school enrollment ratio, education attainment index, and health index.

Baluch articulate that there is a slow-motion genocide going on against them and want the world to help them free themselves.

What do Baluch want?

Baluch want immediate enactment of the autonomy provisions of the 1973 constitution and passing immediate control over all areas except Defense, Communications, Currency, and Foreign Affairs.

Baluch ask that all lands secured in Baluchistan for so called the “Military strategic” reasons be released to the provincial government.

Baluch support the appeal by Beglar Begi Mir Suleman Daud (Khan of Kalat)’s appeal to the International Court of Justice against Pakistan that it has annexed Baluchistan by force.

Baluch appealed to multi-national companies to halt exploration work on disputed projects until the dispute between Pakistanb and Balochistan is resolved. They say they will welcome these companies to restart work in the building of a new Balochistan when they are free and a sovereign nation.

Baluch want the world recognize their right of self-determination in accordance with the provisions of the UN Charter on the International Covenant of Human Rights. Baluch say that by virtue of this right, they are free to determine their political status to pursue their cultural, social and economic development without any external interference.

Other important Take-aways from Conference?

Baluch expressed sympathy and solidarity with all victims of urban terrorism in Karachi (Sindh) and condemned killing of social activist Nisar Baloch and demanded immediate arrest of his killers, who are believed to be supported by a government allied party called MQM.

Baluch pledged allegiance to the Baloch sarmachars (freedom fighters) and called upon all Baloch people to rally behind them to regain Baloch national sovereignty and protect their language, culture, and national survival.

Baluch demanded from UN Human Rights Council to investigate the extra-judicial killing of innocent Baloch leaders, political activists and others.

Baluch expressed opinion that people of Baluchistan and their pro-independence leaders must be involved in any decision about the future of the region in the context of Afghanistan-Pakistan Crisis.

Baluch resolved that the people of Balochistan should be the first beneficiaries of their resources – oil, gas, copper, silver, and gold.

Baluch want a comprehensive infrastructure building program in Balochistan and want special attention to be given to the training and hiring of local Baluch to assume professional responsibilities in the rebuilding program.

A document circulated at the conference expressed solidarity with the struggle of Sindhis, Seraikis, and Pushtuns in Pakistan and expressed support for Kurds, Ahwazis, Turkmen in Iran.

The same document expressed trust in Hyrbyair Marri, Brahumdagh Bugti and Dr. Allah Nazar Baloch as their national heroes. The document further said that they have full trust, confidence and faith in the leadership of Hyrbyair Marri as the main spokesperson for the Baluchistan independence movement, internationally.
Other Events at Conference

Mr. Arjemandi made a heart-wrenching appeal to the Norwegian government and the world community to help in securing the release of his brother. In his appeal Musa says that his brother Ehsan Arjemandi, a Norwegian citizen, was taken away by Pakistani agencies in July this year. Like in the case of disappearance of Sindhi activist Dr. Safdar Sarki, the witnesses saw Mr. Arjemandi being led away by security personnel, but the Government of Pakistan is now denying any knowledge of his whereabouts. More information on this disappearance and other Baluch-related issues can be found at http://www.thebaluch.com/

Screening of well-known Documentary “The Baluch”

It is often said a picture is worth a thousand words and indeed “The Baluch” documentary, which is only 26-minute long narrated the deploring conditions in Balochistan, the simple lives of its simple people, and interviews with top-most leaders of Balochistan. The Baluch leaders explained history of their country and go into details of why they have been driven into fighting for their rights and independence. The documentary can be viewed at http://www.blip.tv/file/1211472.

The audience were fortunate to have opportunity to listen to both Wendy Johnson and Annie Nocenti (co-producers), who described their trip, their impressions and why they sympathize with Baluch. Ms. Nocenti advised that she appalled at the lack of knowledge about the plight of Baluch among Americans. She advised that Baluch should change their communication strategy by relating their plight with the conditions of native Americans. She said that Americans are aware and feel guilty of what happened to native Americans – pushed to live on reservations with worthless treaties.

They would see the similarities between the wrongs done in the past to the native people and the opportunity to stop the same tragedy happning to Baluch and Sindhis. Ms. Johnson said that making this documentary has been both joyful and sorrowful. She added that she has been impacted so much by the plight of the nomadic Baluch people that she wants to help more and is the webmaster of most comprehensive web site http://www.thebaluch.com/. She talked about her exchange of emails with Balaach Mari and Hyrbyair Marri and what convinced her to become supporters of Baluch people.

The homage to Shaheed Balaach Marri was circulated at the conference with title “A Profile of Courage”. Balaach was born on January 17, 1966 and was killed fighting Pakistani military on November 20, 2007. He was the fourth among six sons of Nawab Khair Bux Marri. After release from Pakistani prison in 1979, Khair Bux Marri and his family went into self-exile ito Afghanistan n 1979. Thus, Balaach completed his secondary education in Afghanistan. It is believed that Balaach was very close to his father and used to call his father as “Ada” (a Balochi and Sindhi word that means “Elder Brother”). Balaach studied “communications engineering” in Moscow. He left his homeland when he was only 14 years old, and returned back at the age of 27 years. Starting in 2003, he started organizational work for Balochistan resistance. One of his greatest achievements is that he played a pivotal role in resolving the long-term feud between Marri and Bugti tribes and worked closely with Nawab Akbar Bugti to lead the Balochistan national cause.

Some Baloch came from West coast and some joined from East coast. Others came from Canada, Europe, Baluchistan, Pakistan, India, and other countries. I heard them making presentations and chatted with them during breaks. I presented alternate scenarios and differing point of views. When it was all said and done, it was the first time in my 25 years of activism in the Sindhi Rights movement that I sensed an unshakable resolve of Baluch in fighting for their rights. They were passionate for their cause and angry that many of their brightest have lost their lives. They mourned, they cried, they shouted and asked that Pakistani military to leave their lands. The said again and again that they they want to rebuild their lives and their country without foreign domination. They want the world to help them get rid of the yoke of slavery so that they can build houses for hundreds of thousands who are now refugees, educate their children, and use their natural resources to bring gas, electricity, and economic welfare to their people.

About Author: Mr. Khalid Hashmani is a Washington DC-based veteran human rights activist. He is the founding President of Sindhi Association of North America (SANA) and Chief coordinator of Sindhi Excellence Team (SET) that participates in advocacy activities on behalf of rural Sindhi.