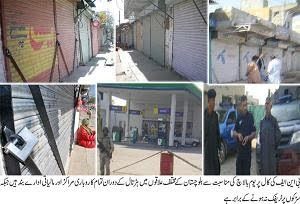 A former member of the Balochistan Assembly, Balach was killed under mysterious circumstances on November 20, 2007 in a town on the Pak-Afghan border.

The Anjuman-e-Ittehad-e-Marri and the Baloch National Front (BNF) called Friday’s strike, which was observed by all nationalist parties, the business community, transporters and the legal fraternity. Shops, restaurants and offices of private companies were shut in the city while traffic on the roads also remained thin.

"Everyone across Balochistan supports the shutter-down strike call, which shows that Balach Marri, who sacrificed his life for the rights of the Baloch people, is recognised as the undisputed hero of Balochistan," said a BNF spokesman. He said Balach had written a new chapter of struggle and sacrifice in Baloch history and would always be remembered as a hero who fought for the rights of his people during the military regime of former president General (r) Pervez Musharraf.

Life remained paralysed in Mastung, Kalat, Noshki, Turbat, Panjgur, Awaran, Gwadar, Naseerabad, Sibi, Khuzdar and other districts of Balochistan. The strike remained peaceful throughout the province as no unpleasant incidents were reported. Police and Frontier Corps patrolled different districts in order to tackle any unpleasant incident.