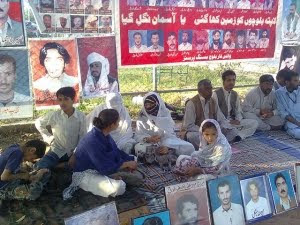 Islamabad: The family members of forced disappeared Baloch in affiliation with Voice for Baloch Missing Persons ended their three day (17-16-19 March) token hunger strike here on Friday and took out a protest rally opposite Pakistani PM’s residence. These families had long marched via train from occupied Balochistan to Pakistan’s capital to protest in front of UN office and Pakistan Supreme Court in order to draw their attention towards the plight of those families (people of Balochistan) whose loved ones have been missing for years.

Several Baloch students from Islamabad visited the Baloch protest camp to show their solidarity with the families of abducted Baloch political activists. One of the female Baloch students in Islamabad while talking to BBC Urdu said that “It is devastating to see these families wandering from one city to another and knocking door of Pakistan’s impotent judiciary. She went on to say that “It is a gross Human Rights Violation that several Baloch have now been disappeared for 9-10 years. It is a big blow on the face of those so called Human Rights Organisation which claim to be protecting the Human Rights of innocent people, off course that includes the UN as well”.

Addressing the crowed Mr Nasrullah Baloch chairman of VBMP said that Balochistan and Baloch are suffering at the hands of Pakistan military from last 62 years. Baloch genocide is taking place in a planned method by the state [Pakistan]. The current ongoing military operation is the fifth offensive action against Balochistan, since the 1948, 1958, 1963 and 1973, thousands of people have been killed, many thousands displaced from their own villages, towns and cities. He alleged that presently thousands of Baloch forced disappeared person are being physically and mentally tortured in secret prisons of Pakistan military and intelligence agencies.

He said according to VBMP’s findings 200,000 people have been displaced from Dera Bugti and 250,000 people were displaced from Kohlu and Barkhan regions of Balochistan. Nasrullah Baloch also alleged that around 8,000 people including the family of Zarina Marri had been arrested & disappeared from different regions in Balochistan most of whom are still missing. He said bringing forced-disappeared Baloch to surface and releasing Baloch political activists was a part of the so called relief package for Balochistan but unfortunately the people of Balochistan have neither seen any package nor the Baloch missing persons have been released. Despite the claims of Pakistan’s PM that Baloch political prisons will be release, more and more people are still being arrested, disappeared and killed by Pakistan’s intelligence agencies and security forces.

Meanwhile families of two Marri Baloch have reported that two of their relatives were arrested on 17-03-2010 from Hazar Ganji fruit and vegetable market. The abducted men have been named as Master Sanam Hussein Marri Baloch and Ghulam Hussein Marri Baloch who had come from Sindh to visit their families in New Kahan Quetta, ‘also known as the “Gaza Strip” of Balochistan’. New Kahan and its residents have been under watch by Pakistani intelligence agencies and military since the dictator Musharraf came to power. Several people had been arrested form this tiny Marri populated area. The region have been under siege most the time, several people including Asad Marri Baloch, Banuk Gul Naz Marri, Murad Khan Marri have been killed by Pakistan military during raids on News Kahan.

QUETTA - A senior lawyer of Balochistan Iftikhar-ul-Haq Advocate was abducted at gunpoint by unknown kidnappers from the centre of provincial capital on broad daylight here on Friday.

Iftikhar was taking his children to school in his car when some unidentified armed men intervened his vehicle at Dr Bano Road and held him on gun point. The kidnappers later dragged the lawyer out of his car and put him into their vehicle and drove away towards unspecified location. On getting information, area police reached the site but the kidnappers had already escaped. In the meanwhile, the news of abduction of senior lawyers spread in the city like jungle fire and the lawyers took to the streets to protest over the abduction of senior lawyer.

Later a protest rally led by former president Supreme Court Bar Association Ali Ahmed Kurd was taken out from the premises of Districts Court which marched towards Chief Minister Secretariat where they staged a sit-in for some time.

They chanted slogans against deteriorating law and order situation in Quetta and strongly condemned the incidents of kidnapping for ransom in the province.

Addressing on the occasion, Kurd and other lawyers demanded immediate recovery of Iftikhar and warned that they would boycott all court proceedings from Saturday across the province if abducted lawyer is not recovered.

They called off sit-in on the assurance of DIG Quetta (Operations) Hamid Shakeel that all efforts would be made for the early and safe recovery of lawyer.