Complete shutter down and wheel jam in Balochistan and Karachi today 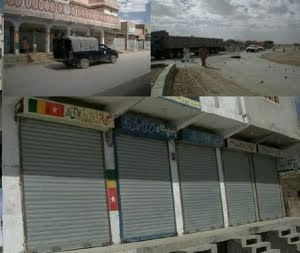 Occupied Balochistan: A complete shutter down and wheel jam strike is being observed all over Balochistan today (Saturday) on the call of Baloch National Unity parties.

According to the details, life in Balochistan is expected to come under a complete standstill after a call given by Baloch pro-independence parties hailing from the Baloch National Front (BNF). The protest is meant to commemorate the illegal and forced annexation of Balochistan on 27 March 1948. Pakistan has forcefully occupied Balochistan in 1948 and in the same year the younger brother of Baloch ruler Prince Abdul Karim started a revolt against the military incursion and fought for the Independence of Balochistan until his arrest. The struggle for independence continues till this day.

All schools, colleges, shops and business centres in different parts of Balochistan, including the provincial capital, are expected to remain shut today in response to the strike call. Many schools and colleges have already asked their students not to come in the wake of the strike call so that they do not face any kind of problems.

Baloch Bar Association, the lawyers, of Balochistan has also announced the boycott of court today and assured their full support to BNF strike call.