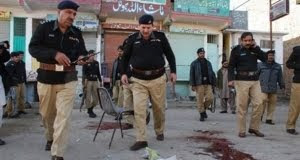 Occupied Balochistan QUETTA: Three people including two policemen have been killed and twelve injured in acts of target killings in Balochistan.

In Quetta one policeman was killed and four other injured when motorcyclists opened fire on them in Samungli road area. The injured have been rushed to the civil hospital in Quetta.

In another incident of target killing unknown gunmen on motorcycles shot dead a police constable in Mastung district of Balochistan, which followed a target killing of a civilian in Hazar Ganji area of Quetta.

Eight people have been injured in hand grenade attack on Chakar Khan Road in Khuzdar. Police say militants hurled a hand grenade at a shop that left eight injured.

In all these incidents the militants managed to escape and no arrest has been made. A sense of insecurity prevails among the people. -DawnNews

Cop among four killed in Mastung

MASTUNG: As many as four people were shot dead in different incidents here on Thursday. According to police sources, unknown assailants killed three people of one family, including a woman at Kanak area. In another incident, a policeman Barkat Shah was gunned down by armed men. Moreover, one person was wounded when someone hurled a hand grenade at his house in Mastung.