Balochistan: Its Importance For The Iran Pakistan India Gas Pipeline 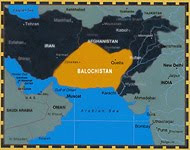 Tuesday, 23 March 2010
Below is an article published by Dawn:

Balochistan, the size of Texas and that accounts for 44 per cent of Pakistan and 16 per cent of Iran's landmass, is a strategically important area.

By virtue of its energy resources and its location, it is key to the energy supply to South Asia, including Pakistan. The country's mounting energy crisis and the growing demand for energy security in the region have magnified Balochistan's economic and strategic importance.

Yet without addressing the grave political challenges in the province, Islamabad is pursuing an ambitious plan to import one billion cubic feet (bcf) of gas per day through the 2,100km-long Iran-Pakistan-India (IPI) gas pipeline.

Balochistan is the only potential land route for the proposed $1.2bn pipeline. A major part - some 1,500km - of the 2,100km-long conduit which will connect Iran's Pars gas field to Pakistan's main distribution system in Nawabshah, will cross Baloch territory in Iran and Pakistan.

Islamabad has been pursuing the IPI project since 1993. Initially, a memorandum of understanding was signed for the construction of an Iran-Pakistan gas pipeline, a project that India later wished to join. The project envisaged a 2,670km land pipeline with a 3,620 million cubic feet per day (mmcfd) gas transmission capacity.

Pakistan and Iran signed the agreement and an operational accord in Istanbul on March 17 [2010]. However, it is not clear how these new agreements are different from the ones inked during President Asif Ali Zardari's visit to Tehran in May last year [2009], following which officials from the newly-formed Inter State Gas System (ISGS) quietly signed the controversial gas sale-purchase agreement in Istanbul.

The policymakers in Islamabad need to take a very realistic approach towards energy security. Amongst the major issues is the seemingly endless political conflict in Balochistan, along with US concerns, high pricing and the threat posed by religious militants.

If billions of dollars are invested in the pipeline before addressing these chronic issues, the whole project is bound to backfire. Islamabad has, as usual, committed a significant political blunder by overlooking the importance of Baloch consent on the proposed gas channel.

Baloch opposition to such a trans-national pipeline was voiced as far back as 2005 when veteran Baloch nationalist Akbar Khan Bugti said that "only the goodwill of the Baloch people can allow the proposed gas pipeline from Iran and Central Asia to India to pass through their soil". He was killed by Pakistan's security forces in August 2006.

In June of that year, members of the treasury and the opposition benches in the Balochistan Assembly exhibited unprecedented unity and passed a resolution seeking royalty for the province in the proposed multi-billion dollar IPI gas pipeline project. Further, the assembly also demanded Balochistan's representation in the IPI talks, free gas for adjacent populations, a 100 per cent job share and a major share in any royalty paid by India.

Currently, however, the proposed gas pipeline project does not envisage any economic or social benefits for Balochistan's under-privileged population. The pipeline will be constructed by international companies that can use high-tech equipment, security will be provided by federal forces such as the Frontier Corps, which is a non-Baloch paramilitary force, and all the available jobs - including technical ones - will go to qualified and technically-sound people from other provinces, since they have the opportunities and the resources to attain high-quality education.

Furthermore, there is no constitutional or legal guarantee that royalty in any form, including security, jobs or gas, will be supplied to the people of Balochistan.

The Baloch people have not had encouraging experiences as regards Islamabad's policies and promises. Despite having provided fuel to the national economy for years, the province has only 3.4 per cent of the country's gas consumers - as opposed to Punjab's 67 per cent, which produces only 4.7 per cent of the gas.

The controversial price accord also makes the project less feasible. According to this price accord, Pakistan will purchase Iranian gas at various prices; the lack of a fixed rate extends great leverage and benefit to Iran in terms of procuring a high price for the gas it exports.

Iran will sell gas to Pakistan for $7 per MMBtu ( one million British thermal unit) if the Japanese Crude Cocktail (JCC) price is $50 per barrel, and $9.4 per MMBtu and $13 per MMBtu if the JCC price touches $70 and $100 per barrel respectively. The price does not include infrastructure, security and other costs.

The imported gas price would be 10 to 20 times more costly than the gas forcefully extracted from Balochistan and Sindh by the central government. Pakistan Petroleum Limited currently pays only 63 cents per MMBtu for Balochistan's high heating-value gas.

However, those 63 cents go to the central government's kitty and Balochistan receives only a 12.5 per cent royalty against the gas produced.

The level of discrimination and exploitation of Baloch wealth can be gauged by these figures: Balochistan produces $1.4bn worth of gas annually but receives only $116m in royalties.Islamabad has always been short-sighted about its economic and political policies. The country's over-centralised political system has resulted in constant political and economic conflicts between the centre and the provinces. Though the Baloch are not stakeholders in Pakistan's internal and external affairs, including policy making, Islamabad cannot deny the fact that Balochistan represents 44 per cent of the country's landmass and shares strategically significant coasts and border areas with the energy-rich Middle East, through Iran.

Until there is a positive breakthrough in the Balochistan conflict, the ambitious IPI gas pipeline venture will remain a pipe dream.