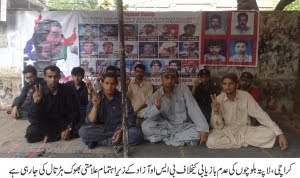 KARACHI: BSO AZAD organised three days hunger strike in front of Karachi press club to demand the immediate recovery of abducted Baloch student and political activists, and against the illegal occupation of Balochistan. The BSO Azad members and other freedom loving Baloch took part in the token hunger strike protest. Speakers said we know that occupiers don’t understand all the democratic ways of protest. The Baloch students made it clear that they were not observing hunger strike for any attention from the Pakistani government, but their aim was to expose Pakistani state atrocities against Baloch people to the civilised world.