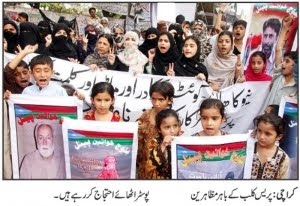 QUETTA - A complete shutterdown and wheel-jam strike was observed in different parts of Balochistan, including the provincial capital, on Saturday against the alleged forced annexation of the province. Infuriated mob also torched vehicles in Quetta and Turbat.

Baloch National Front (BNF), an alliance of 10 nationalist parties, which was also supported by other parties, traders and transporters associations.
In Quetta, all main markets and shopping centres at Jinnah Road, Liaquat
Bazaar, Shara-e-Iqbal, Double Road, Sariab Road, Brewery Road, Joint Road and Qambrani Road remained closed throughout the day. However, thin traffic was witnessed on various roads of the City.
Due to wheel-jam strike, attendance at the government offices remained thin while a holiday was announced for all government and private educational institutions.
Administration had taken strict security arrangements to avert any untoward incident in the provincial capital as police backed by Frontier Corps and
Balochistan Constabulary were deployed at the sensitive areas. The mobile squads of law enforcement agencies continued patrolling across the City.
During the violence, protestors torched a vehicle at Brewery Road and two rickshaws at Jail Road. Similarly, unknown people pelted many vehicles and Punjab-bound Chiltan Express with stones.
A hand grenade was also hurled at the office of FIA on Samangli Road, which smashed windowpanes of the building. However, no casualty was reported in the blast.
Sources said police had arrested four people in connection with pelting vehicles with stones and blocking the roads.
Moreover, Quetta-Karachi, Quetta-Sibi and Quetta-Taftan highways were blocked at different areas causing inconvenience to the commuters.
Shutterdown and wheel-jam strike were also observed in other towns of Balochistan including Khuzdar, Kalat, Mastung, Nushki, Dalbandin, Turbat Gwadar, Panjgur, Hub and Kharan.
In Turbat, unidentified people set on fire parking lot of Family Planning office and a PTCL cabinet; however, the fire was extinguished due to timely action by police. Protestors also burnt tyres and placed barricades on different roads in the town.