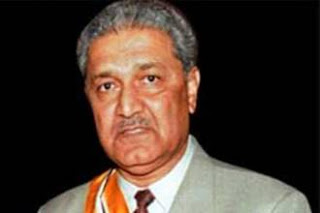 A Pakistani court said Monday disgraced nuclear scientist Abdul Qadeer Khan remained a free man but ordered him to give security services prior notice about his movements, lawyers said

Khan's lawyer, Ali Zafar, said his client would be a "free man" as long as he informed the government about his movement.

In February 2009, a court declared Khan -- revered by many Pakistanis as the father of the country's atomic bomb -- free five years after he was effectively put under house arrest for allegedly operating a proliferation network.

But the 73-year-old Khan has since filed a string of complaints in court over security arrangements against him. The United States has warned that he still represents a nuclear proliferation risk.

Announcing its decision on Monday, the high court in the eastern city of Lahore effectively upheld the 2009 ruling but issued instructions on the amount of prior notice Khan must give on his movements.

"The court has disposed of the case and validated the decision of the Islamabad High Court on Feb. 6, 2009," said Ahmar Bilal Sufi, a lawyer representing the government.

"Dr Khan will have to inform the authorities 30 minutes prior if he has to go out of his house in Islamabad and one day's prior notice for going out of the city due to security reasons," he said.

He said the attorney general met Khan a few days ago and reached a "mutual agreement" on the issue.

"Dr Khan, if he would like to, can interact with media, but he will not be able to speak on nuclear proliferation issue," he added.

Khan's lawyer Ali Zafar said there would be no restriction on his client's movements, but conceded he would have to give prior notice to authorities so that he could be provided with security.

"The movement of A.Q. Khan will not be restricted, but will be subject to the provision of security and prior intimation of his movement. Khan will not issue any statement on nuclear issues," Zafar said.

In February 2004, Khan confessed on television to sending nuclear secrets to Iran, Libya and North Korea, although he later retracted his remarks.

Pakistan's military ruler and then president Pervez Musharraf pardoned Khan in 2004, but he was kept at his residence, guarded by troops and intelligence agents.

The United States has long raised fears about the scientist.