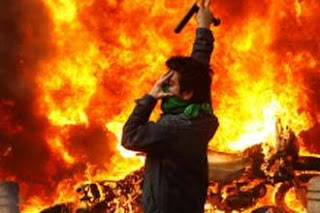 A relative of Iranian opposition leader Mir Hossein Mousavi said his nephew's body was removed from hospital without the family's permission, a day after he was shot dead in clashes during anti-government protests, which state TV said killed 15 people.

The body of Seyed Ali Mousavi, the nephew of Iran's opposition leader killed in Tehran protests, has been transferred from the hospital to an unknown location, his brother told a website on Monday.

"My brother's body was taken away from the hospital and we cannot find it," Seyed Reza Mousavi told Parlemannews, the website run by the reformist minority faction in parliament.


"Nobody accepts responsibility for taking away the body ... We cannot have a funeral before we find the body."

The 35-year-old nephew of Mir Hossein Mousavi was shot dead in Tehran's Sunday protests which turned into the bloodiest showdown between opposition protesters and security forces in months.

Tehran police said they were investigating the death.

"The killing of Mousavi's nephew in Ashura incidents is being investigated and the result will be announced soon," Tehran police chief Azizollah Rajabzadeh told ILNA news agency on Monday.

Jaras said opposition politician Ebrahim Yazdi, leader of the banned Freedom Movement and foreign minister in Iran's first government after the 1979 Islamic revolution that overthrew the U.S.-backed shah, was detained early on Monday at his home.

" My brother's body was taken away from the hospital and we cannot find it "
Seyed Reza Mousavi Meanwhile Iranian state television reported that more than 15 people were killed in protests, 10 of whom were members of "anti-revolutionary terrorist" groups.

The other five who died during Sunday's fierce clashes in the Iranian capital were killed by "terrorist groups," the report said, without elaborating.

An injured Iranian opposition supporter flashes a V-sign during clashes with police in Tehran
According to opposition websites the unrest had spread to other parts of Iran, including the holy city of Qom, Shiraz, Isfahan, Najafabad, Mashhad and Babol.

The reports could not be independently verified because foreign media are banned from covering protests.

The White House condemned the "unjust suppression" of civilians by the Iranian government and said the United States was on the side of protesters.

Canada condemned what it called "brutal violence" used by Iranian authorities against protesters and urged restoration of human rights in the country.

The killings showed that the confrontation between the opposition and the clerical establishment had entered a volatile phase, in which the security forces appeared determined to stamp out the pro-reform movement.

The disputed re-election of hardline President Mahmoud Ahmadinejad has plunged Iran into its biggest internal crisis since the 1979 Islamic revolution, exposing deepening divisions in its ruling elite and setting off a wave of protests that the opposition says left over 70 people dead.

Officials say the death toll was half that number.