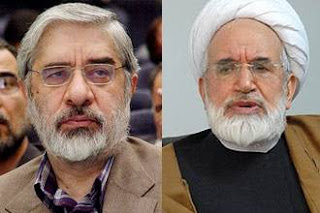 Iran's state news agency IRNA said on Wednesday that two leaders of "sedition" in the country have fled to a northern province as tens of thousands of government supporters rallied in cities across the country.

"Two of those who played a major role in igniting tension in Iran following the (June presidential) vote, fled Tehran and went to a northern province because they were scared of people, who demanded their punishment," IRNA reported.

The two mentioned were believed to be opposition leaders Mir Hossein Mousavi and Mahdi Karroubi who were reportedly in the Mazandaran province, north of the country.

" You should repent ... otherwise the system will confront you as an enemy of God "
Cleric Ahmad AlamolhodaEarlier on Wednesday, Iran's police chief warned Mousavi's supporters to expect harsh treatment if they joined illegal anti-government rallies, three days after eight protesters were killed in demonstrations.

Tens of thousands took part in the government-organized demonstrations, which state television broadcast live, chanting slogans against Mousavi and Karroubi.

"You should repent ... otherwise the system will confront you as a 'mohareb' (enemy of God)," cleric Ahmad Alamolhoda told reformist leaders at a Tehran rally, state TV reported. Under Iran's Sharia, or Islamic law, the sentence for a mohareb is death.
http://www.alarabiya.net/articles/2009/12/30/95766.html
Posted by Mohim Baloch at Wednesday, December 30, 2009