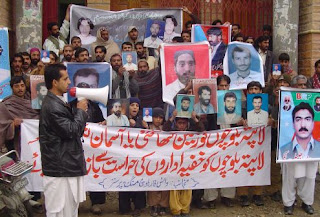 The Baloch Hal News
QUETTA: Families of Baloch missing persons staged a protest rally on Tuesday to agitate on the disappearance of their relatives on the eve of Prime Minister Syed Yousaf Raza Gillani’s two-day long visit to Balochistan’s coastal town of Gwadar.

The protestors were carrying the photographs of the missing persons and banners which called for the immediate recovery of those citizens who have allegedly been whisked away by the state-controlled intelligence agencies. They chanted slogans against the federal and provincial governments, chief justices of the Supreme Court and the Balochistan High Court, Prime Minister Syed Yousaf Raza Gillani, President Asif Ali Zardari, Governor of Balochistan and Chief Minister of the province.

Speaking on the occasion, Nasrullah Baloch, chairman of the Voice for Missing Baloch Persons who led the rally, said the protest rally was meant to convey a message to Prime Minister Gillani that he was not welcomed in Balochistan on the eve of his visit to the province because he had not fulfilled his promise of bringing the missing persons back to their families. Terming the PM as absolutely powerless, Nasrullah said the families of the missing persons were desperately waiting for the return of their beloved ones but the government was not taking any serious interest in providing relief to the families of the missing persons.

“The Balochistan package was a complete fraud extended to the people of Balochistan in order to divert public attention from genuine issues faced by the Balochs. The package made fun of the families of the missing persons as no one among those who have disappeared has returned home,” he said.

He said the families of the missing persons would stage a hunger strike camp before Quetta Press Club on December 30 (Wednesday) to resist the growing number of enforced disappearances. “More people have disappeared from Balochistan under the Pakistan People’s Party government as compared to those who were picked up during the Musharraf government. This is disgusting that Chief Minister Nawab Raisani is laccusing the missing persons of having deliberately gone underground to defame the state intelligence agencies. We challenge him through the media to substantiate his claim by exposing even one person who deliberately went underground to malign the state intelligence agencies?” he said.

The chairman of the organization threatened to besiege the governor and chief minister houses in Quetta if the government did not reproduce all the missing persons of Balochistan. “The issue of enforced disappearances is the greatest humanitarian disaster we have seen in our life time. International organizations like the UNICEF and the International Committee of Red Cross should intervene and see the impact of these disappearances on the women and children of the affected people.”

In the next phase of the campaign to press the government to fulfil its promise of resurfacing or releasing the missing persons, members of around one hundred missing persons’ families will undertake a long march to Islamabad before the offices of the United Nations Organization (UNO).

The VMBP chairman also criticized the judiciary for not taking the up the matter of missing persons after the restoration of the deposed chief justice of Pakistan Justice Ifthakar Mohammad Chaudhary. “We have been left in lurch. Our dear ones are missing and the family members are going through an agonizing period. Yet, the response from the judiciary and the international human rights organizations is very lacklustre.

Organizations striving for the rights of women do take up minor issues and hold seminars on these matters but they have kept totally quite on the issue of the missing person and its subsequent impact on the health of the mothers, sisters, wives and children of these people who have gone missing for ages. Our children are suffering from scores of psychological problems. They are scared of going outside homes due to the fear of being whisked away by the intelligence agencies,” he added.