News : Shutter down strike against killing of disappeared Baloch activists 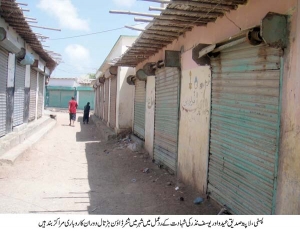 Occupied Balochistan: A complete shutter-down strike was observed in Baloch dominated areas of Balochistan on Friday to condemn the recovery of two bullet-riddled bodies of Baloch missing persons near Ormara on Thursday.

The strike was observed in Pansi, Jiwani, Gwadar, Ormara, Panjgur, Turbat, Khuzdar and other areas.

A large number of policemen and other law enforcement personnel were deployed in the areas to avoid any untoward incident.

Meanwhile, Human Rights Commission of Pakistan (HRCP) Balochistan chapter had strongly condemned the brutal murder of its activist Mohammad Siddiq Edo and termed it the failure of government. According to a Press release issued here on Friday, HRCP Chairperson Balochistan Chapter accused government functionaries of detaining and killing of Mr. Siddiq Edo. "The kidnappers were in official dress and in official uniforms and they also used official vehicles at time of kidnapping. The lack of interest in carrying out investigation and recovery of missing HRCP interest affirm the notion that government functionaries were involved," it was stated in the press release.

It further stated it was not the first incident because the human rights activists were also targeted in past. Such incidents suggest that the lives of those who are defending human rights are at stake. Naeem Sabir another human right activist was gunned down in Khuzdar and Government functionaries were blamed for the murder. HRCP demanded that government should stop harassing and threatening human rights defender so that they can perform their duties without fear and panic.