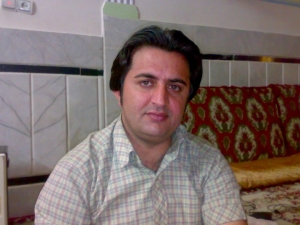 Occupied Balochistan: Have you heard of Sakhi Regi? Certainly, his name has not reached to your ears. He was one of the imprisoned after the presidential elections of the year 1388 (2009). This political activist and writer run a blog called “Sarafraz Balochistan blogfa" during the elections of year 1388 (2009) he was one of main supporter of Mir Hassan Mosavi. On 28 Khordad 1388 (18 June 2009) he was in his personal car along with his wife and daughter when some people have stopped them at University Street Zahidan and abducted him at gunpoint. After lots of efforts and pursuit it has been established that he has been abducted by Iranian Intelligence agencies.

After seven months of illegal imprisonment Sakhi Regi in an undisclosed location has been charged for "propagating against the system" [Iranian Regime] through his blog and for this he has been awarded 20 years sentence. After spending three months in Zahedan, capital of Iranian occupied Balochistan, prison he has been shifted to Kaaroon Prison in Ahwaz the Arab Majority region in Iran. The transfer doesn’t only add salt to the wounds of innocent webloger but his family would find it impossible to travel hundreds of miles for visits.

Latest reports reveal that Mr Sakhi is not feeling well because of the torture and inhuman treatment he suffered in prison. Young Regi who has just turned 31 year is a student of IT computing and has not completed his education yet.

What kind of justice is it that has separated nine (9) year old Rezwana, daughter of Regi, from her father only for writing few lines in a weblog? Shall this child spend her juvenile life without her father and reunite with him when he becomes 50 after spending his youth in prison under torture and ill-treatment? What sort of justice is this? Isn’t this unfair to Mr Sakhi and his family?

According to Baluchinews Iran has a notorious history of intolerance towards blogging and many bloggers face arrests, tortures and imprisonments. Situation for Baluch bloggers is even more severe. At least one of the Baluch bloggers namely Yaghub Mehrnehad was hanged on similar charges in 2008. He was the first ever blogger to be hanged throughout the world.