The trio were captured two days ago and their bodies dumped in fields in the Yaka Ghaound district of Mohmand, one of the seven districts in Pakistan's lawless tribal belt on the Afghan border, said local administrator Mairaj Khan.

Residents said a note was found near the bodies, identifying them as criminals "defaming" the Taliban.

"They were involved in various crimes, including theft and kidnapping for ransom, posing as Taliban. We killed them so others may learn a lesson from this," the note said.

A man who identified himself as a local Taliban spokesman said the trio had masqueraded as Taliban. "They were defaming our organisation," said the man who called himself Sajjad Mohmand.

Pakistani Taliban have been blamed for many of the deadliest bomb attacks hitting Western targets, Pakistani security forces and civilians across the nuclear-armed country over the past three years.

The Islamist militia is fighting an insurgency against the Pakistani military concentrated in the tribal belt and other parts of the northwest. 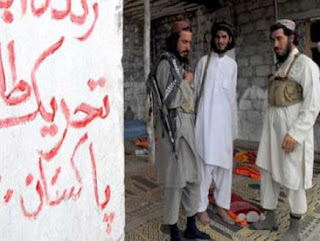 Residents said a note was found near the bodies, identifying them as criminals “defaming” the Taliban
Posted by Mohim Baloch at Thursday, October 28, 2010