Pakistan continues the abduction of Baloch students and political activists 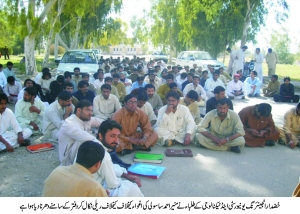 Occupied Balochistan: Report of the abduction of several Baloch youth from different areas of Balochistan and the persistent sit-in protests of the relatives of Baloch illegally detained persons.

Two students kidnapped in Khuzdar: Two University students were whisked away by a group of heavily armed men late on Tuesday night near Rabia Khuzdari Road in Khuzdar City. Father of the kidnapped persons, Qazi, Hassan Ali, accused Frontier Corps personnel of taking his sons hostage. According to Hassani Ali, a group of armed men barged into their house at 2:00 am and tied him and sons with ropes and blindfolded them all. “The armed men severely tortured us and they were FC personnel because we recognized them during their conversation and their way of talking using a strange language,” he added. He said the armed men whisked away his sons Munir Ahmed Sasoli and Saud Sasoli at gun point. “I chased the armed personnel and saw with my naked eyes as kidnappers entering in FC camp at Khatan, a locality of Khuzdar City” he alleged.

He said that his sons had no affiliation or links with any organization or political party. They are students, Qazi Sahib told newsmen. He made an appeal to the kidnappers and the President of Pakistan for safe and immediate release of his sons. Meanwhile, students of Balochistan University of Engineering and Technology, Khuzdar, staged a noisy rally condemning the hostage taking incident. They shouted slogans against the Government and security personnel accusing them of spoiling the academic atmosphere and academic peace in the educational institutions by resorting to such unlawful activities. The protesting students warned that if the steps were not taken for immediate recovery of both the kidnapped students, they will launch a protest campaign and intensify it across Balochistan.

The joint secretary of BNM Mr Zahid Baloch said that Hameed Baloch and his friend were on their way to Gwadar after participating in a wedding party of a relative in bairi Dasht area on 25 October. He said that some reports suggest that on the same day the FC has shot injured and arrested two Baloch men in the Karwaat area between Gwader and Dasht and it suspected that they might be Hameed and his friend.

Meanwhile a press release of Gwader Press Club said that Hameed Baloch son of Hayatan Baloch of Gwadar is a senior member of Press Club. He was working as chief editor of “Roznama Karachi Hub” in Gwadar; his membership number is 26/07.

According the Gwadar Press Club statement on 25 October Mr Hameed along with another friend was on his way (on a motorcycle) to Gwadar after attending the wedding party of a relative in Dasht (Bairy). They have been abducted from Karwaat area, their family members and friends believe they have been arrested and disappeared by Pakistani security forces.

The press Club statement further read that despite his affiliation with a Baloch political party his illegal arrest is condemnable and the supreme court of Pakistan, the prime minister and chief minister of Balochistan to take immediate measures to ensure Hameed Baloch is safe and early release.

“Hameed Baloch’s arrest and disappearance is a matter of grave concern for Baloch journalists. If he has committed any crime or if he was wanted in any cases then the government to bring him to surface and give him an opportunity to a fair trial in the court of law.” The Press Club warned if he is not released or surfaced immediately they will be forced to start a protest campaign along with other media men in Balochistan.

Khuzdar another youth disappeared: Ramatullah Sasoli Baloch has said that his son Mohammad Hassan Sasoli went for work on Wednesday 27 October 2010, and did not return home. He belongs to a poor family and works at a flour Mill. Mr Ramatuallh suspected that his son has been abducted like other Baloch youth in Balochistan.

Youth arrested for hoisting Balochistan flag: The Pakistan forces in Tomp town of Makran region went wild yesterday as a Baluch youth hoisted Baluchistan’s flag on a historical castle. The forces promptly surrounded the castle and removed the flag. They arrested a youth named Adil Baloch son of Bahut Baloch and taken him to an unknown location.

Thereafter, the FC soldiers continued a mass operation in the town. During this operation they removed the flags from the houses and businesses as well as physically abused the dwellers, reported by BUC news and dailytawar Balochistan.

The previous day BSO-azad in a political move had asked schools and other establishments not to recite Pakistani national anthem and hoist Pakistani flags during their assemblies, or else they can cause public anger. That statement also created great amount of disturbance in the establishments.

Baluchistan’s flag and boycott of Pakistani national anthem and Pakistani media are big psychological challenges to armed forces and show a strong desire of the masses for a free Baluchistan.

Persistent Protest by families and friends: On the other hand the families of Baloch abducted persons continue their sit-in protests in front of Press Clubs in Quetta and Turbat. In Turbat the relatives of Nabeel Baloch, Waleed Baloch, Yasir Baloch, Sameer Abdul Karim Baloch and Sameer Rashid Baloch have established a protest camp at Shaheed Fida Baloch Chawk. They said that they have been protesting for several weeks now but the judiciary of Pakistan and other state departments seem to be either blind or deaf to see and hear their hue and cries for help. They if their loved ones have committed any crime they must be brought to surface and tried in courts.

Families and friends of several Baloch missing persons are also at protest in front of Quetta press Club for last several months. The Pakistan state, its judiciary and the state sponsored media has been ignoring their protests despite their repeated appeal for help, especially, for the media.