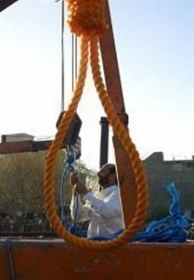 Occupied Balochistan: Iranian authorities announced that they hanged a person in Zahedan –capital of the Iranian occupied Balochistan- Thursday. The man was accused of armed resistance and ‘disturbance on the face of earth’. The Baluch man was named as Abdolaziz Nutizahi.

Earlier Pahra news blog reported that two Baloch youth were killed by Iranian armed forces near Bampur city of Iranian occupied Balochistan. The report on Pahra further read that the two were travelling in a car as they were shot at by the armed forces on Sunday.

The report suggested that the shooting took place following the failure of the car to stop on police orders. The deceased were not named in the report.

Such actions are routine in the West Balochistan as locals who fear unnecessary arrest and torture by the forces if they ever were stopped, hence they choose to risk their lives.

Independent sources reported that another Baloch youth was shot dead by Iranian security forces near zahidan University. On the conditions of anonymity the source further said that the man has been shot dead after a bomb was found at a book exhibition centre in the jurisdiction of the university. It is suspected that the Iranian security forces wanted to hide this news from the media and the man who had been shot dead was an eye-witness of the incident.

According our anonymous source it is most likely that the bomb was placed by the Zaboli agents of the Iranian regime because a large number of Sunni Baloch students were expected to visit the book exhibition centre on that day.

The killing and abduction of Baloch youth by Iranian regime and their agents is on the rise but due to media restriction we receive very little information about the regime’s atrocities against Baloch people in Iranian occupied Balochistan.