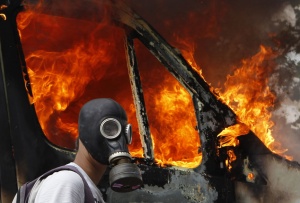 (Reuters) - Human rights violations in Pakistan's southwest province of Baluchistan are getting worse as militants and security forces target civilians, while authorities seem unwilling to rein in lawlessness, according to a report released Wednesday.

The Human Rights Commission of Pakistan (HRCP), an independent non-governmental organization, said in its report that lawlessness in the province had proliferated at an alarming rate with a growing numbers of targeted killings, kidnappings, enforced disappearances and attacks on religious minorities.

For decades, Baluchistan has been facing a low-level insurgency by nationalists who want more control over the province's natural resources, which they say are unfairly exploited by the federal government.

Zohra Yusuf, HRCP chairwoman, said at least 140 mutilated bodies of people gone missing had been found in the past year.

"A very dangerous trend has emerged that those who disappeared were now found dead on roadsides. The bodies have torture marks," she told a news conference at an Islamabad hotel.

HRCP report says 143 people have gone missing since 2009 but Yusuf said the number could be much higher because the commission reported only those cases which it could verify.

There was evidence to substantiate families' claims that victims were kidnapped by security forces or had been killed while in custody, she added.

Baluchistan is Pakistan's largest and poorest province, borders Afghanistan and Iran, and has large mineral reserves, including oil, gas, copper and gold.

Due to the continued violence and insecurity, most foreign and local investors avoid investing money in Baluchistan, which hinders its development.

Yusuf warned that the insurgency could flare up if the government continued to fail to implement a political solution to the Baluchistan situation.

"The Baluchistan government seems non-existent," she said. "They have surrendered their authority to security forces and they (forces) are calling the shots," she said.