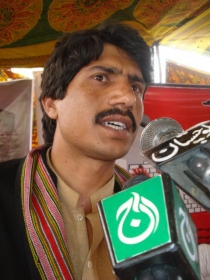 Occupied Balochitan: Central spokesperson of Baloch Student Organisation Azad (BSO) said in a statement that, two years of Zakir Majeed Baloch’s abduction by Pakistani security forces has been completed. Thousands of innocent Baloch students, lawyers, professors, teachers and political activists have been disappeared by Pakistan military; they are being brutally tortured, killed and dump by the state apparatus but the so called Human rights organisations are silent about this new human tragedy in Balochistan.

The statement further read that abducted Baloch are being brutally tortured to death and their bodies are being dumped in deserted areas in Balochistan. Additionally, he said, except Zakir Majeed Baloch, dozens of other BSO leader and activists are also being illegally detained by Pakistani security forces at their secret dungeons. Those who are still missing include Fazull-ur-Reham, Imran Baloch, Arshad Baloch, Asif Baloch, Mushtaq Baloch, Zakir Baloch, Aftab Baloch and several others.