Report: Public Meeting in the memory of the ,by Pakistan, assassinated Prof. Saba Dashtyari Baloch in Stockholm 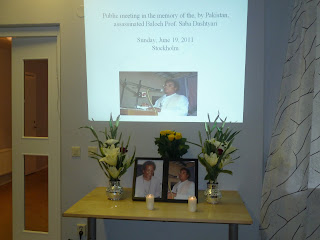 Stockholm: A public meeting was held in Stockholm to highlight and condemn the assassination of Prof. Saba Dashtyari by Pakistan Inteligence Service, ISI. Many of Baloch political and human rights activists have participated in the meeting. The meeting has been called by some political and human rights activists from Stockholm. The meeting was Chaired by Mohammad Zeindini and Mohim Borhanzahi. The speakers included Mohammad Zeindini, Mohim Borhanzahi and Vahed Dehani.


All three speakers talked about Saba and his important role as creator of public opinion as well as carers and developer of the Balochi language. They talked further about his various projects in this area and that his passing is a great loss to the Baloch nation in general and the Baloch language in particular. Dedhani read out a poem on the Baloch that he had written himself in the memory of Prof. Saba Dashtyari. Here below can you find Mohim Borhanzahi's presentation/speach.


A complete report in Balochi language from the meeting will be published soon here.


•- Influent in many languages including English, Urdu, Persian, and Arabic
•-Top balochi language writer
•- Intellectual and debater mailny in balochi literary but also in  social and political issues
•- His articles are often published by leading journals and magazines
•

Who assassinated him?
•-  Whether it's Ansar ul Islam or FC (Frontier Corps) who carried out the murder, the responsibility lies with the Pakistani military and the central government of Pakistan

Thank you for joining this meeting

The Baloch Hal: Editorial: The Baloch Noam Chomsky Is Dead

A report from this meeting will soon be sent from ww.Rozhn.tv