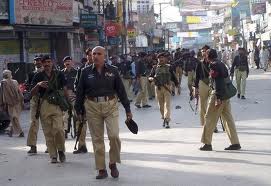 Occupied Balochistan,MASTUNG: Pakistan ATF (Anti-Terrorist Force) and police have carried out a joint operation in Kadhkucha area of Mastung. One person have been killed and six arrested by the occupying forces. Local authorities say they have been kept in dark about the operation.According to details the Pakistani police and ATF raided Dashtboo area of Kadhkucha in Mastung and started a search operation.Sources reported that the residence of the area have strongly resisted the unprovoked action of the security forces and violations of the sanctity of the houses.

Both sides shot live round at each other for several hours. One person named Aziz Ahmad Qalandarni Baloch was killed by Police and ATF firing whereas the security forces have arrested Mohammad Rafiq Qalandrani along with six (6) other people of area. The arrested men have been taken to Quetta. The local authorities (Levis) have not been informed about the operation.

The local notables of different tribes in the area have strongly condemned the police and ATF for carrying out the operation against innocent Baloch residents. They said the forces have violated the sanctity of Baloch houses; tortured and harassed innocent occupants. The notables said at least one men have been killed and several arrested by security forces.They demanded that the arrested men must be released immediately.