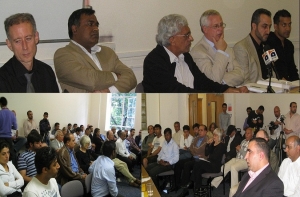 United Kingdom: A public meeting was held in London to highlight and condemn the ongoing Pakistani state terror against Baloch people and minorities. A fair number of Baloch political activists and representative of different Human Rights Organisations have participated in meeting to learn about Pakistan’s atrocities against people of Balochistan.

Addressing the gathering Baloch leader Hyrbyair Marri said that the recent wave of state sponsored violence against Baloch, the kill and dump policy has intensified from July 2010. However, the under custody killing further accelerated, when Pakistan’s interior minister, Rehman Malik, has threatened to “CRUSH” pro-independence Baloch political parties and student organisations during a visit to Balochistan in September 2010. Since July 2010 over 160 enforced-disappeared Baloch have been killed and dumped in deserted areas of Balochistan, among them 82 have been killed in first six month of 2011

He said the victims belonged to all walks of life and age groups - children as young as 14 years old and elderly persons as old as 80 years have been abducted tortured and killed during captivity by Pakistan’s military intelligence.

Abdul Majeed Baluch, a member of BSO-Azad [BSO-Azad is a Baloch student Organisation who politically supports Balochistan’s Independence movement] was abducted by Pakistani Frontier Corps on 18 October 2010, his bullet riddled body was found near a River in Khuzdar district on 24 October 2010. Another Baloch youth, Mohammad Khan Zohaib was abducted in July 2010 by Pakistani security forces. His brutally tortured and mutilated body was found on 20 October 2010 near Khuzdar town – both of them were 14 years old. Abid Rasool Baloch, a 17 years old Baloch student was killed and dumped in Panjgour district on 27 January 2011.

Chakar Qambar, Asif Karim Baloch, Qayum Baloch and several other students of universities in Balochistan were abducted, subjected to brutal torture and killed by Pakistan military intelligence. They have been killed for merely being Baloch and demanding for a free and dignified life for the Baloch people.

He further said that Pakistan was not even sparing Baloch intellectuals, journalists, lawyers, Human Rights activists, writers and poets. Lala Hameed Baloch a journalist, Siddique Edo a human Rights activist, Ilyaz Nazar a writer, Ramatuallah Shaheen a Journalist, Zaman Khan Marri a lawyer, Ali Jan Baloch, a Balochi and Brahui folk singer, Faqir Mohammd a poet and singer were all arrested and tortured to death during captivity. Their bodies riddled with bullets were found on road sides and deserted areas in Balochistan.

He said Pakistani security forces have also abducted and killed Baloch National leaders like Ghulam Mohammad Baloch, Lala Munir Baloch, Sher Mohammd Baloch, and university professors like Saba Dashtyari Baloch who was recently shot dead in Quetta by Pakistan military’s death squad. He said they were all pro-independence political leaders who did not opt for armed struggle. They only addressed massive public gathering and held demonstrations to create awareness among Baloch people, still Pakistani military brutally murdered them.

He said aged people and women activists have also been victimized by Pakistani brutal forces; on May 21, 2010 leaders of Voice for Baloch missing Persons were going to Karachi to appear before the judicial commission when their vehicle was targeted by Pakistani security agencies near Kalat town. 82 years old Bibi Mehtab Baloch died on the spot and other leaders were seriously wounded. Body of 70 years old Ahmad Khan Marri was discovered in Lesbela district on 2nd June 2011. An 80 years old Baloch, head of his family, Raheem Khan Qalandrani Baloch is still being held and possibly tortured by the Military at some undisclosed location.

He made it clear that no one but the occupying state of Pakistan is responsible for such heinous crimes and death and destructions in Balochistan. “In the mind of Baloch people there has never been a slightest of doubt about who are the responsible for the miseries and agony of Balochistan “that is Iran and Pakistan”. It has been our experience all way along since the illegal occupation of our beloved motherland. There is nothing new for us - From day one of the illegal occupation they have been following the same policy in Balochistan”.

He said that the scale of current Baloch democratic movement is reaching four corners of Balochistan, people from all walks of life are taking part in this freedom movement – Baloch Nation is now aware of the occupying state’s intentions and acts. Baloch have experienced a long history of lies, deception and false promises by the occupying state and they have now come to the conclusion that “enough is enough”. Despite all efforts of the occupying states of Iran and Pakistan, Baloch people have never stopped their legitimate struggle for regaining their sovereignty and Independence, he added.

He the reason for intensified state atrocities was the mass participation of our people in the struggle for freedom which made the Pakistani state more fearful and desperate in dealing with Baloch liberation movement hence it is using all tricks and criminal means to keep us under her occupation.

According to Hyrbyair Marri the only way forward for us is a free, democratic and united Balochistan. However, democracy and prosperity is impossible in Balochistan under the illegal occupation of fundamentalist states of Iran and Pakistan.

James Nichols, a professional lawyer, spoke of his experience when he visit Pakistan and met the torture victims from Balochistan. He said their stories were shocking and painful. “I also interview Ghulam Mohammad Baloch and Sher Mohammad Baloch who were later abducted from their lawyers’ office and killed. This clearly illustrates that this is a brutal state and that federal government is brutally repressing the people of Balochistan. From my point of view as a lawyer it is crystal clear that Pakistan government is in breach of all international conventions and protocols in relation to the people of Balochistan”.

Hedayat Bhutto, the chairman of World Sindhi Congress, said that in Balochistan Pakistan has adopted the policy of genocide whereas in Sindh they adopted the policy of colonization. He said currently over 40 Sindhi political activists were being illegally held by Pakistani military at undisclosed locations. He said Pakistani security forces were killing secular Sindhi leaders; these killings and arrests seem to be a part sustained campaign to eliminate leadership of indigenous Sindhi Organisations that are demanding for National right of self-determination.

He said that question arises why the West is quite and why they are not supporting the secular Baloch and Sindhi people to gain their freedom. “It is already too late and it going to be very late – as some philosopher said - when the Nazis came after socialist and I kept quiet because I wasn't a socialist. When they came after communists, I kept quiet because I was not a communist. When they came after Jews, I kept quiet becaue I wasn't a Jew. Then they came for me and there was no one left to speak out for me – similar thing is going to happen if we keep quiet against this regime of Jihadi generals who are committing crime against humanity in Sindh and Balochistan”.

Wilson Chowdhry, Chairman British Pakistani Christian Association, spoke about the plight Christian community in Pakistan. He Christians only attain a 7% of literacy level; that is an adequate level of literacy, 80% of Christian community works in sewerage industry, as domestic labor or as cleaners. So they are classed as the “untouchables”.

Peter Tatchell spoke about what he called lack of unity among the Baloch groups. He said everybody who is passion for Balochistan should work for the unity among Baloch because in the history no divided movement has ever won its liberation. When movements are divided they are weak and the oppressor grabs them by the throat and throws them, so, unity is the fundamental criterion for moving forward the Baloch liberation movement. He also suggested that Baloch need a freedom charter or written document to present it to the world about their demands and to tell them what a future free Balochistan looks like.

Representative of British Tamil Forum, people of Kashmir and International Committee expressed their solidarity with the Baloch people and urged the Baloch to continue their just struggle. They also said that Baloch should work with other oppressed Nation on International forum and try build an International Solidarity group to promote Baloch cause.