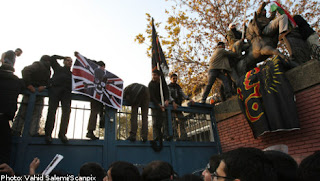 The Swedish foreign ministry sent for the Iranian ambassador on Wednesday to discuss what officials described as the "unacceptable" attack on the British embassy in Tehran.
"The ambassador was summoned to the foreign ministry this morning," ministry spokeswoman Linn Duvhammar told AFP.

Iran's head of mission, Rasoul Eslami, met with Robert Rydberg, the head of the ministry's Middle East and North Africa unit, a day after protesters rampaged through two British diplomatic compounds in the capital, one of which contained its embassy, tearing down the British flag and torching documents.

The protesters were reflecting official anger at Britain's decision last week to cut all relations with Iran's financial sector as part of a raft of new sanctions against Iran over its nuclear programme.

Duvhammar said Sweden, like the rest of the European Union, considered the protests "unacceptable."

She would not disclose the details of Wednesday's meeting, but said the Iranian ambassador was reminded that "Iran is required to ensure the safety of the British embassy."

Meanwhile, Foreign Minister Carl Bildt told Swedish news agency TT that Stockholm had no plans to recall its ambassador after Germany announced it was doing so.

"We underlined for him that the protection of embassies is a key responsibility for countries, and I think he got the message," he said.

Neighbouring Norway meanwhile announced earlier Wednesday it was temporarily closing its embassy in Tehran due to security concerns.

Britain on Wednesday ordered the closure of the Iranian embassy in London and shut its mission in Tehran after the attack.
AFP/The Local (news@thelocal.se)
What do you think? Leave your comment below.
http://www.thelocal.se/37666/20111130/
Posted by Mohim Baloch at Wednesday, November 30, 2011