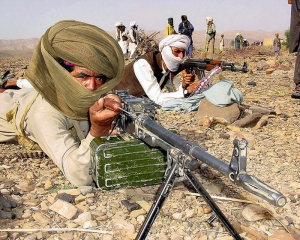 According to details clashes erupted in the Chamalang mountainous area Sunday evening after Baloch fighters attacked a camp of Frontier Corps (FC) troops, which continued until Monday morning.

A spokesperson of Baloch Liberation Army, Meerak Baloch, informed BBC Urdu that BLA fighters have killed at least 40 Pakistani soldiers and scores have been wounded in the battle. He also said that all the machinery, vehicles and other equipment at the Pakistani troops’ camp have been completely destroyed. The Baloch fighters also took with them the weapons of Pakistani soldiers.

One Baloch fighter has been injured the battle against occupying forces who later succumbed to his injuries.

Media sources said that at least 11 FC troops were injured. The bodies of killed soldiers and injured have been evacuated in helicopters. The injured were airlifted to a military hospital in Quetta, the capital of Balochistan.

Meanwhile the Baloch National Voice has said that Pakistan military has launched an offensive and indiscriminate bombardment in the entire region where the battle took place. The BNV spokesperson said that dozens of innocent villagers have been arrested and taken to unknown locations by Pakistan security forces. The military operation is still continuing in several areas of Kohistan Marri.