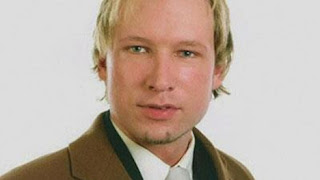 The suspect in the twin attacks that killed at least 92 people in Norway was a member of a Swedish neo-Nazi Internet forum, a group monitoring far-right activity said Saturday.
"He created a profile in 2009, with a pseudonym that can be traced back to his email address," Mikael Ekman, a researcher with the Stockholm-based Expofoundation, told AFP.

It was not possible however to determine when the suspect, named by Norwegian media as Anders Behring Breivik, was last active on the forum, which counts some 22,000 members from across the region, he said.

Nordisk, a web forum founded in 2007, describes itself as a portal on the theme of "the Nordic identity, culture and traditions."

It hosts discussions on "everything from white power music to political strategies to crush democracy," Ekman wrote in an article published Saturday on the Expo magazine's website.

Nordisk's members range from Swedish members of parliament for the far-right Sweden Democrats party to Nazi leaders, the article explained.

"What united the members is a critical attitude to the current refugee policy and immigration," it said.

Some contributors to the forum have posted comments inciting violence.

"Cars parked next to high buildings with fertilising powder + diesel gives a nice effects," one anonymous user said last year on the forum.

"The buildings go down like the World Trade Center."

"I think it's a but too bad that people do not see this is a war we must wage," the contributor, who Ekman said was not Behring Breivik, added.

"Those ... in government, who do not live close to or don't have to experience immigrants' threat in their nice neighbourhoods ... in my world there is no dishonest act one can commit against these monsters," the user wrote.

At least 85 people were killed when a gunman dressed as a policeman opened fire at a youth camp hosted by the ruling Labour party's youth wing at an island near Oslo.

Earlier Friday, seven people were killed when a bomb ripped through the government quarter in the Norwegian capital.
AFP/The Local (news@thelocal.se)
What do you think? Leave your comment below.
http://www.thelocal.se/35124/20110723/
Posted by Mohim Baloch at Sunday, July 24, 2011